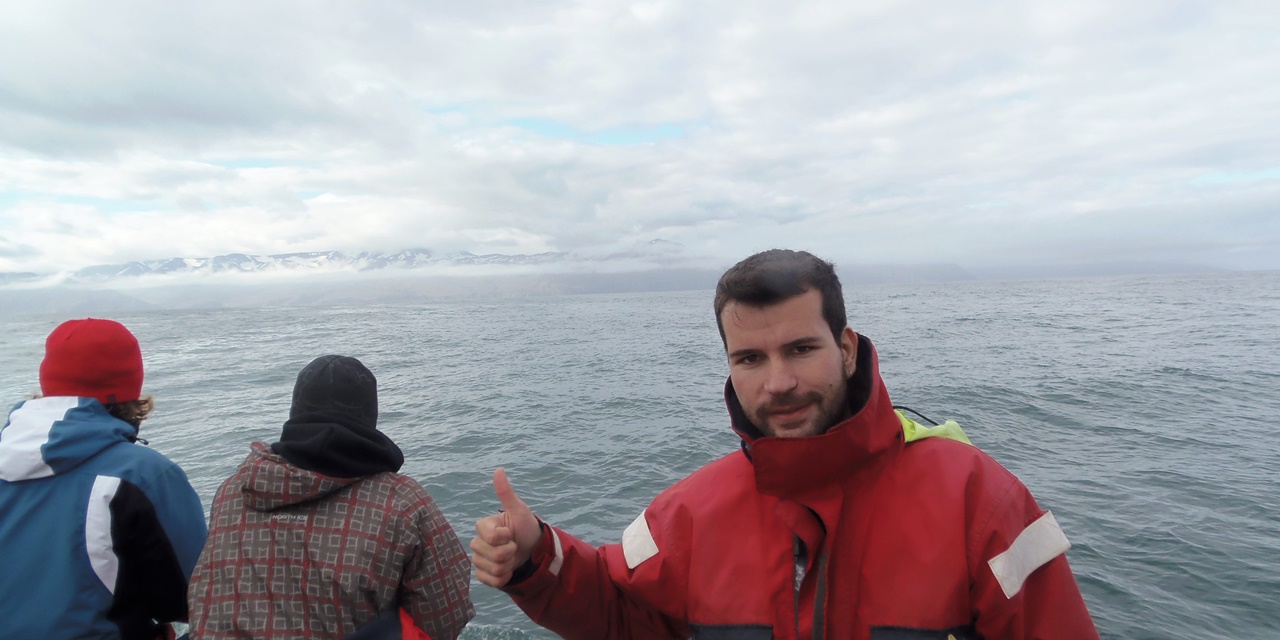 246 km including whale watching, ascent to a volcano, visit to fumaroles and crater, and, in addition, the night surprised us with a glimpse of the northern lights. 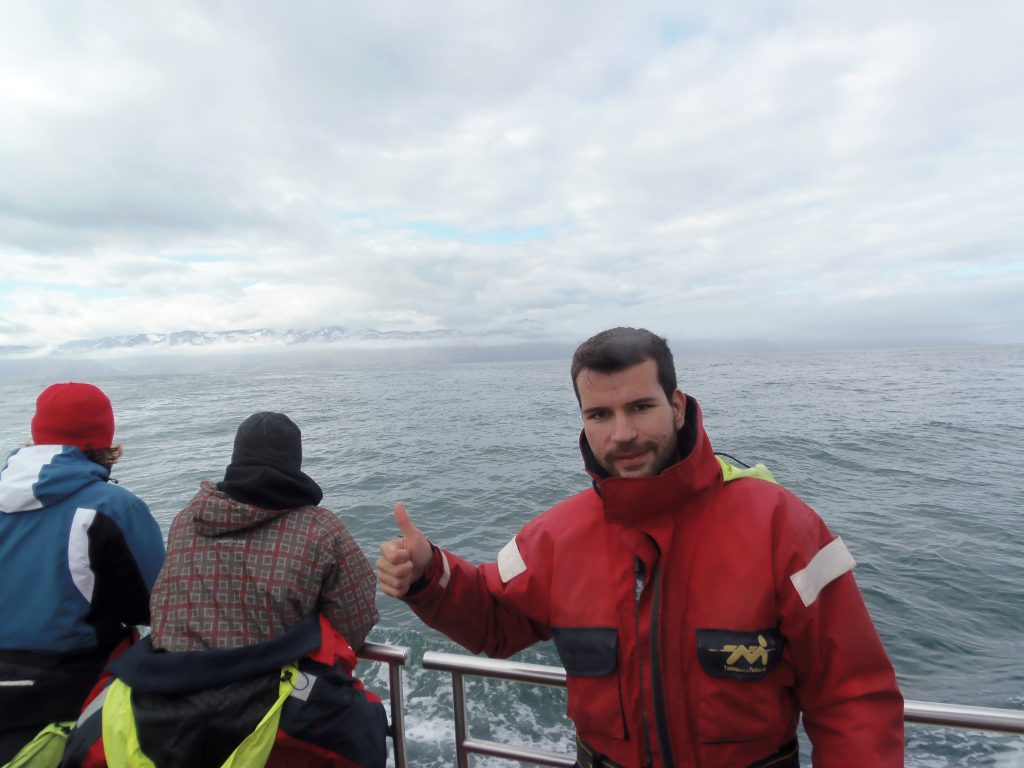 We woke up in Húsavik, as I wrote in the previous entry, the whaling village of Iceland. It is a fishing village that I liked a lot. The pier area is the liveliest and there are several restaurants and bars where you can have a drink. Center of the village, the church is a precious wood built in 1907 with Norwegian wood. 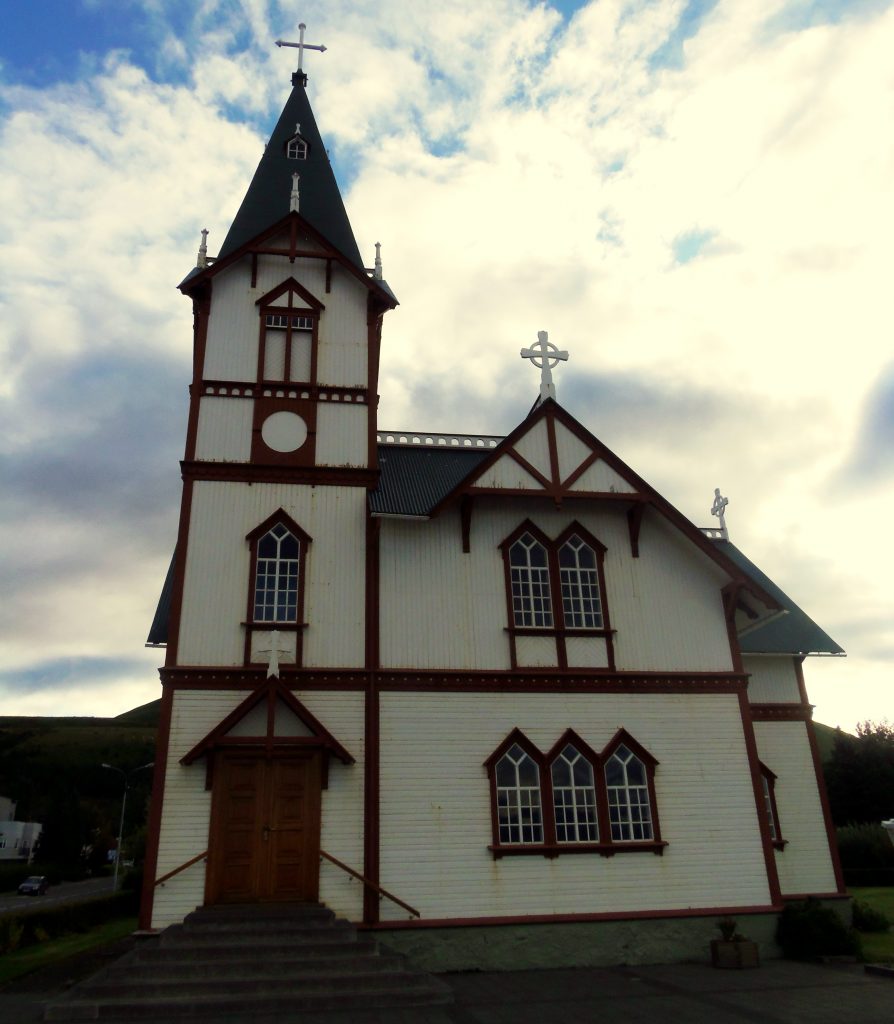 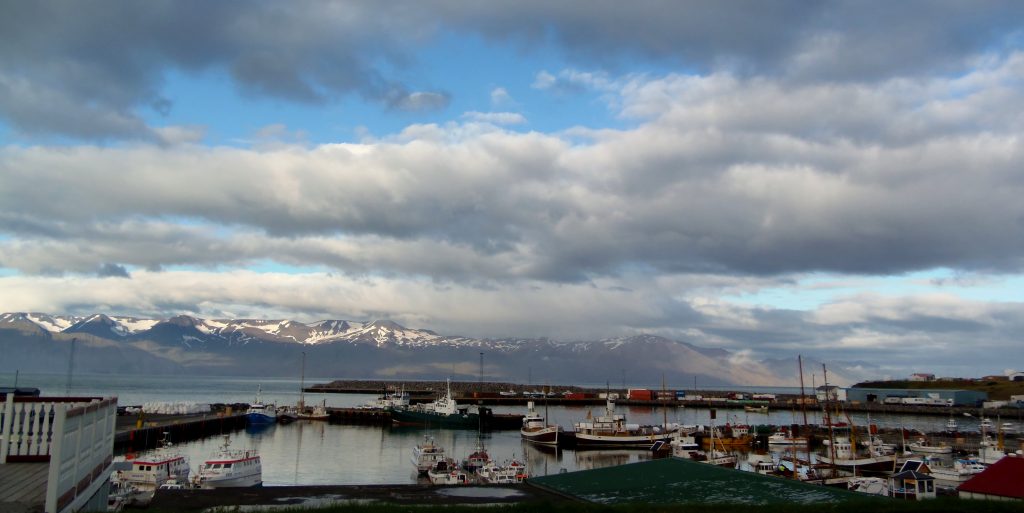 There are tours from Akureyri, Reykjavik and other villages to watch the whales (highly recommended experience). However, from here in Húsavik you are assured to see them with a probability of 95%, since we are very north, a few kilometers from the Arctic Circle. We decided to do it with NorthSailing. They offer coffee, chocolate and scones on board, and the equipment of a waterproof jacket that is indispensable (out there in the cold it is terrible). I got very sick in the boat, even if the sea was not too bad, but almost everyone was feeling like that. 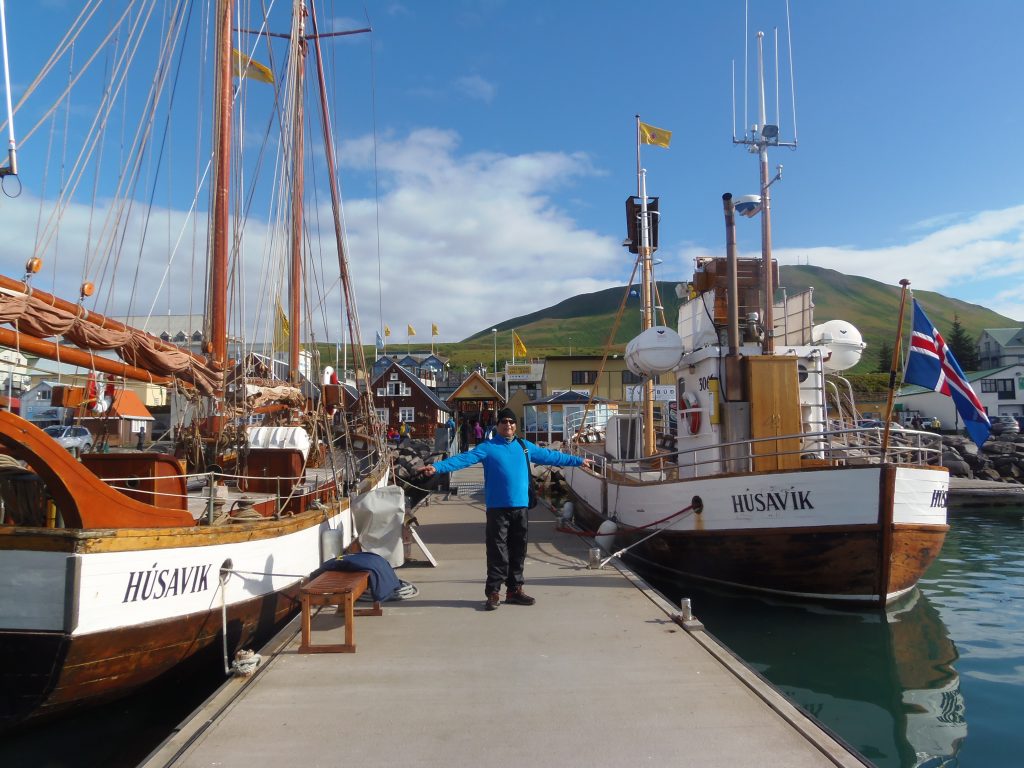 My father, one of the few unsicked sailors.

From the boat you can enjoy some beautiful coastal and village landscapes. As every rule has its exception, we could not see any whales even though they announced it as sure. We were told that it was the first time in the whole summer that they did not see any of them… so we all were given the possibility to repeat the excursion at noon. Although we would have been delighted to see them, we had had a bad time aboard, and we had more plans for the rest of the day. Many people did stay to repeat. 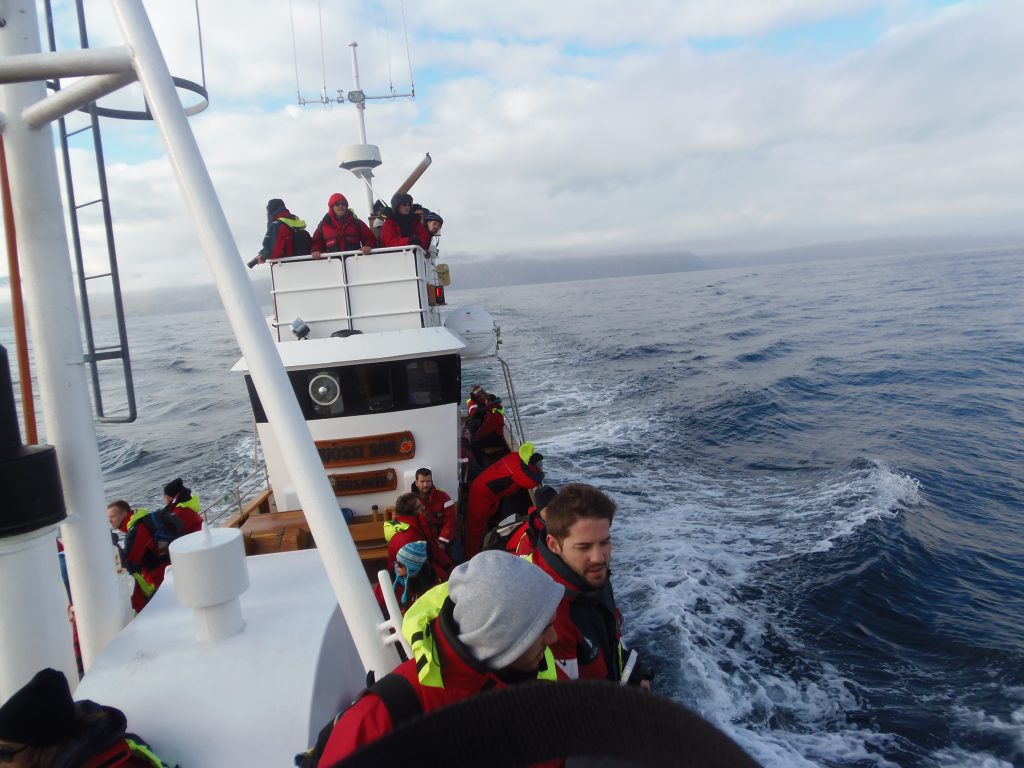 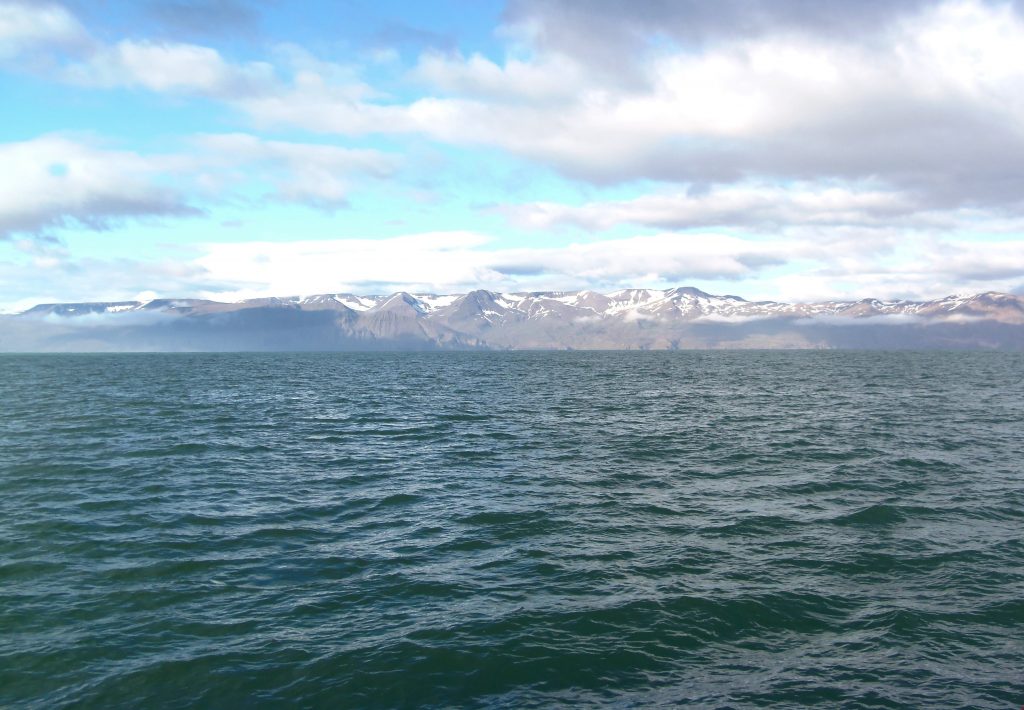 The north of Iceland from the sea. 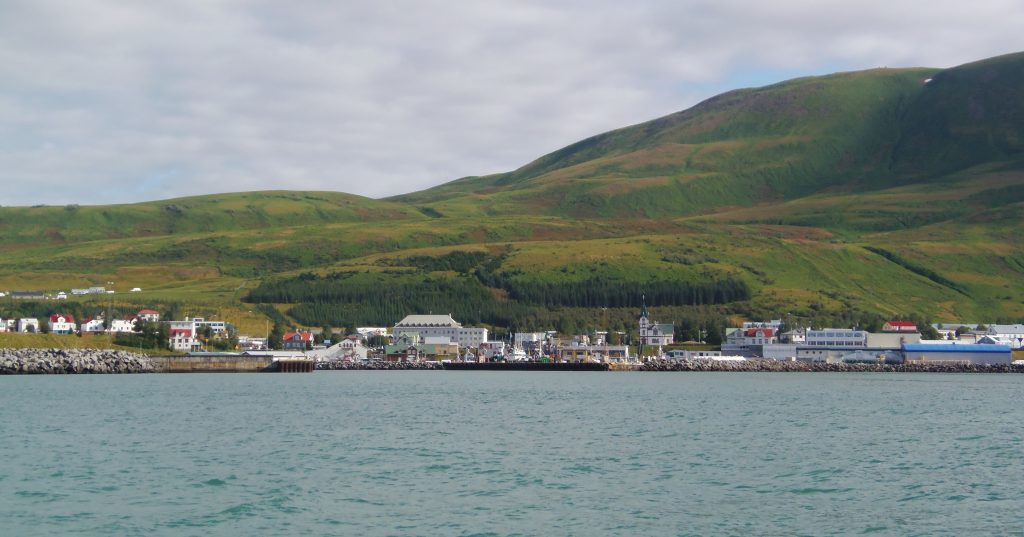 Húsavik as seen from the sea.

Once on the mainland, and after recovering a bit, we headed to the Húsavik Whaling Museum, which is right on the dock. Here you can see old photographs, whale skeletons, narwhals, tools and other objects. 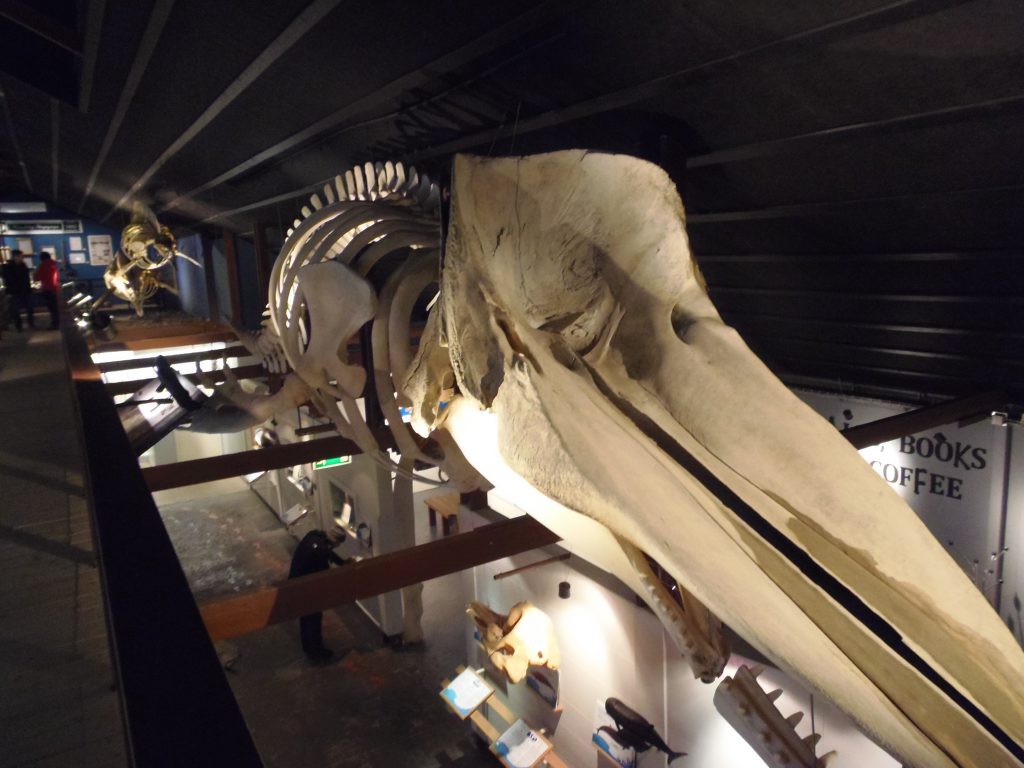 We left before noon to Myvatn, and took the road 87 to Reykjahlid. In this part we enter the interior, and the Ring Road leaves to the side the coast, that we will not see again until arriving to the extreme east in Seydisfjordur. Road 87 has several unpaved sections, but it is absolutely passable. 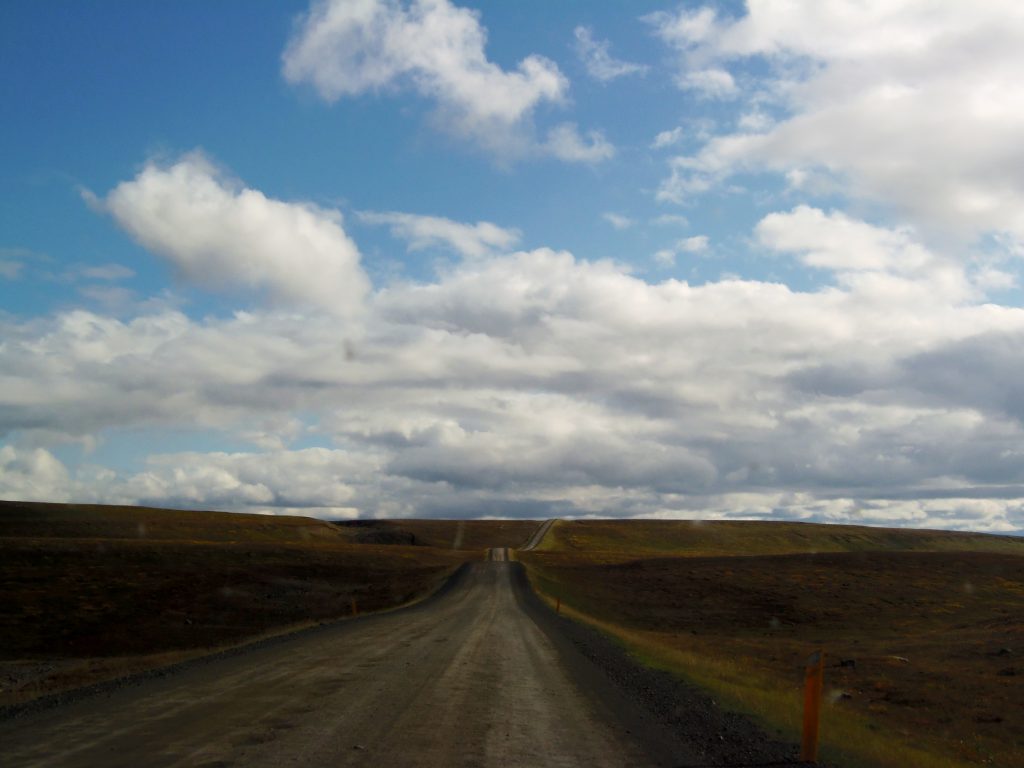 Myvatn is a volcanic zone in the heart of Iceland, which combines extinct volcanos with other active ones, lakes, fumaroles and, above all, many mosquitoes. In the supermarket of Reykjahlid there was such a cloud of mosquitoes that we ran from one side to another. The motive is the geography of the area, being a land dotted with lakes and stagnant waters from the thawing of the snow. In this area “hollowed out” by the controversy of the volcanic activity, the mosquitos find a perfect home.

Reykjahlid is the little town where a visitor center is located and where they inform you of everything that can be done there. I warn you that there are many possibilities, and here you could spend a whole day (or days). We decided on our top3: Hverfjall crater, Hverir fumaroles and Viti Lake. You can go by car; there are car parks in each of them. And from there, you can start to walk through the route of ascent.

Firstly we went to Hverfjall: it was a great experience to climb up and see the crater. I’ve never seen such a big volcano before. 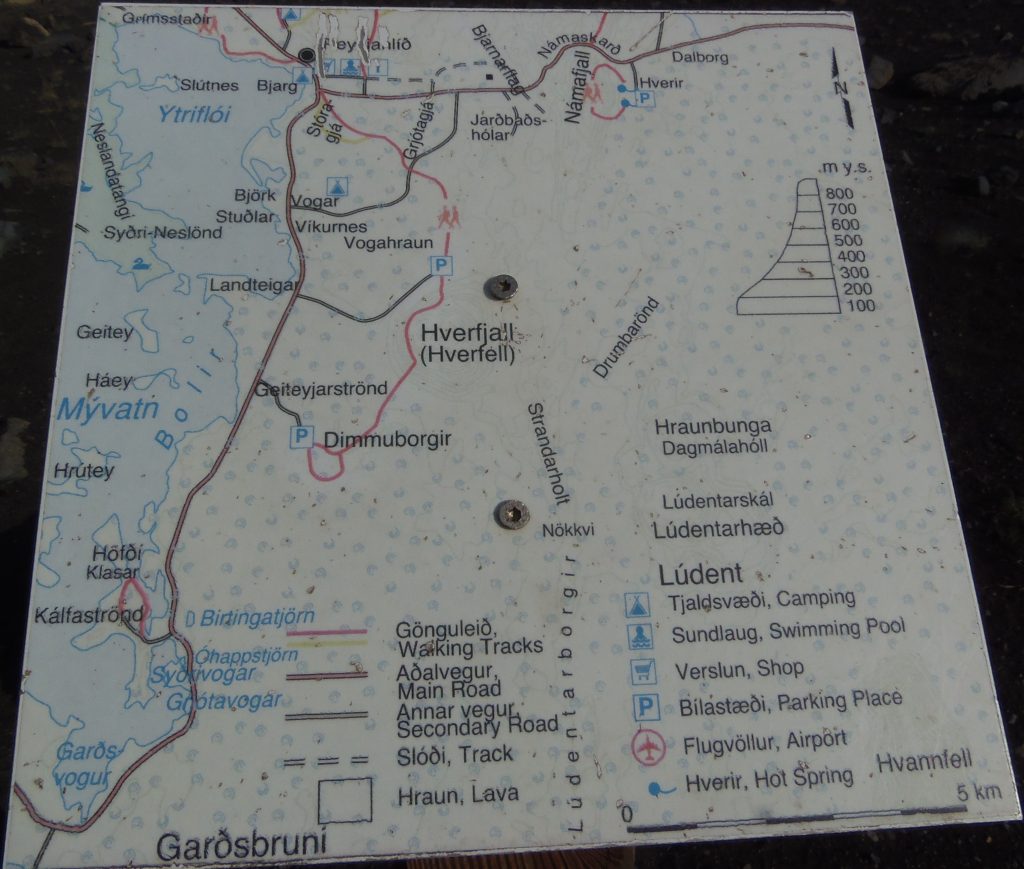 Here you got a panel about Myvatn. 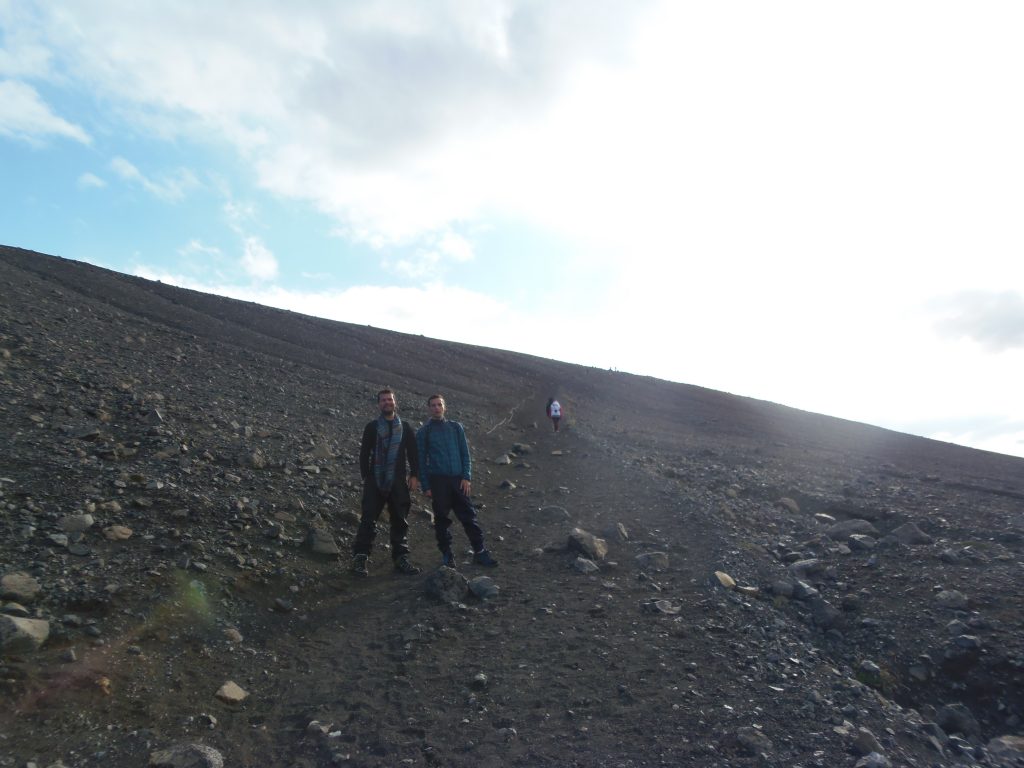 Climbing up the Hverfjall volcano with my brother. 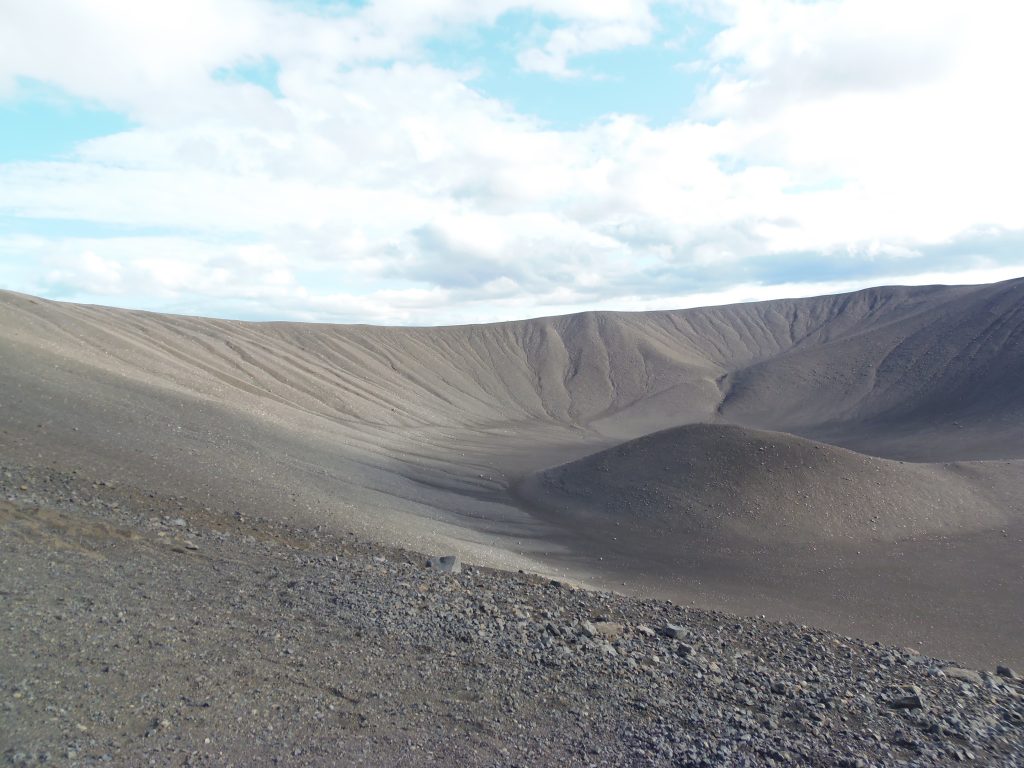 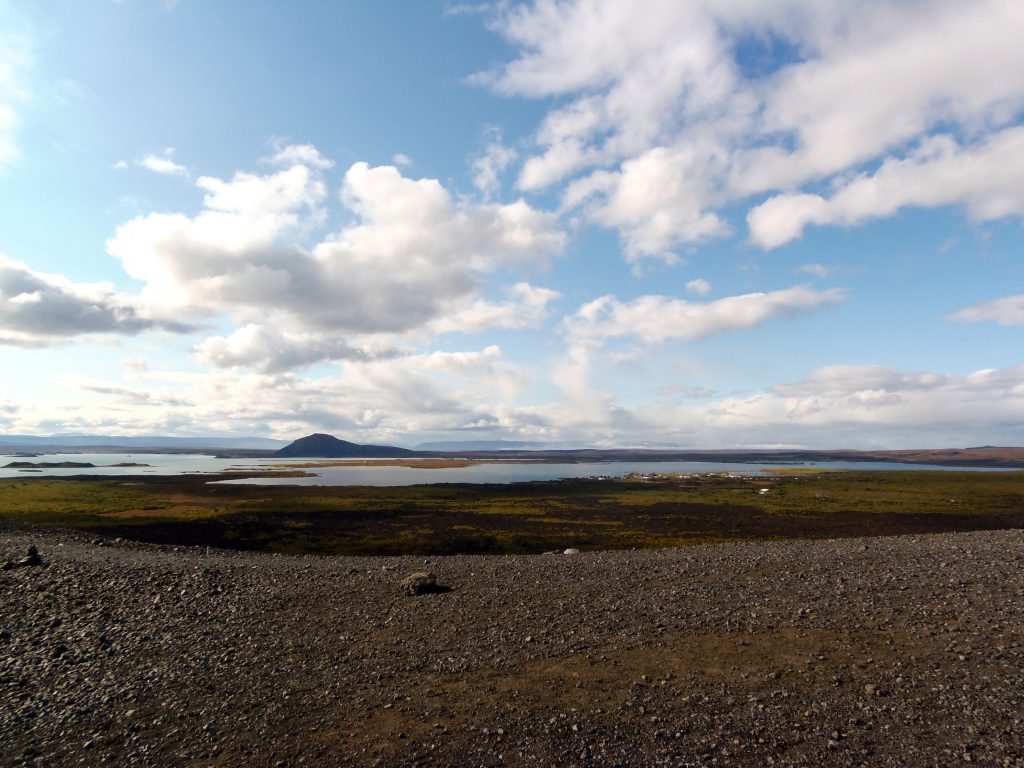 From Hverfjall we head to Hverir, a land with a great geological activity. On the way you can see geothermal power stations. In fact, Iceland is almost self-sufficient energetically, thanks to geothermal and hydraulic energies. 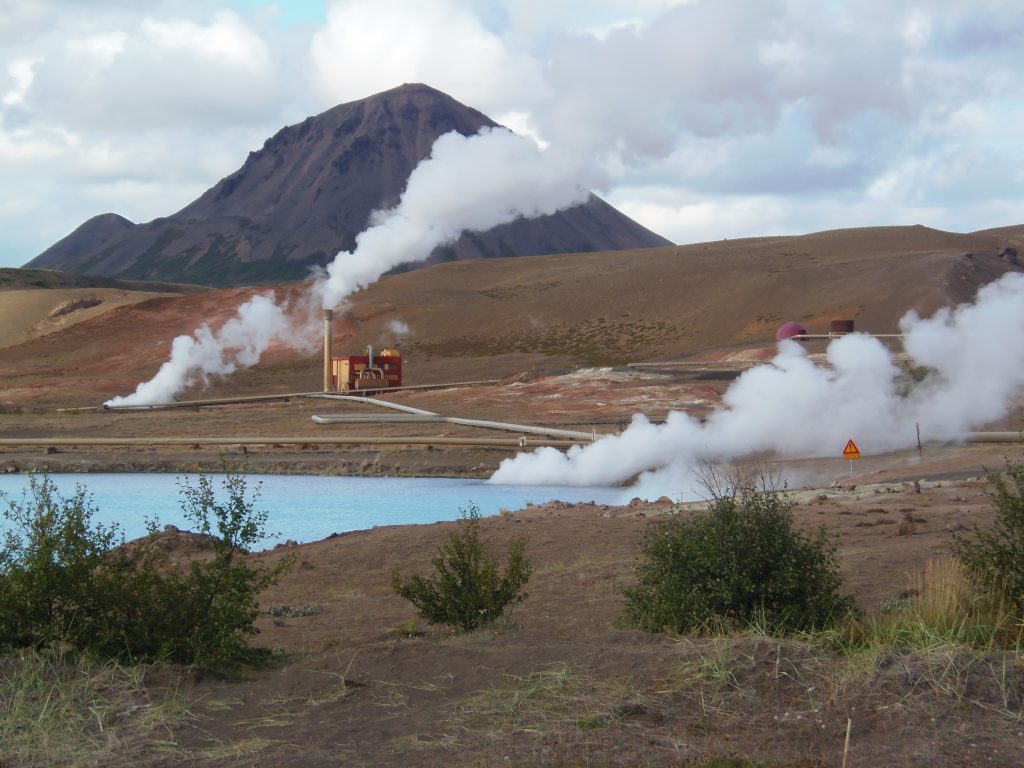 We arrived at a landscape of another world, alien. It is a place where there are fumes of water vapor and sulfur that throw a plague to rotten egg almost unbreathable; and in addition to these sulphurous fumaroles, there are also some “mud volcanos” that bubble without stopping. All this makes of Hverir an area of great instability in the subsoil, which is manifested in the rugged terrain and the numerous cracks emanating these gases and liquids at great temperature. 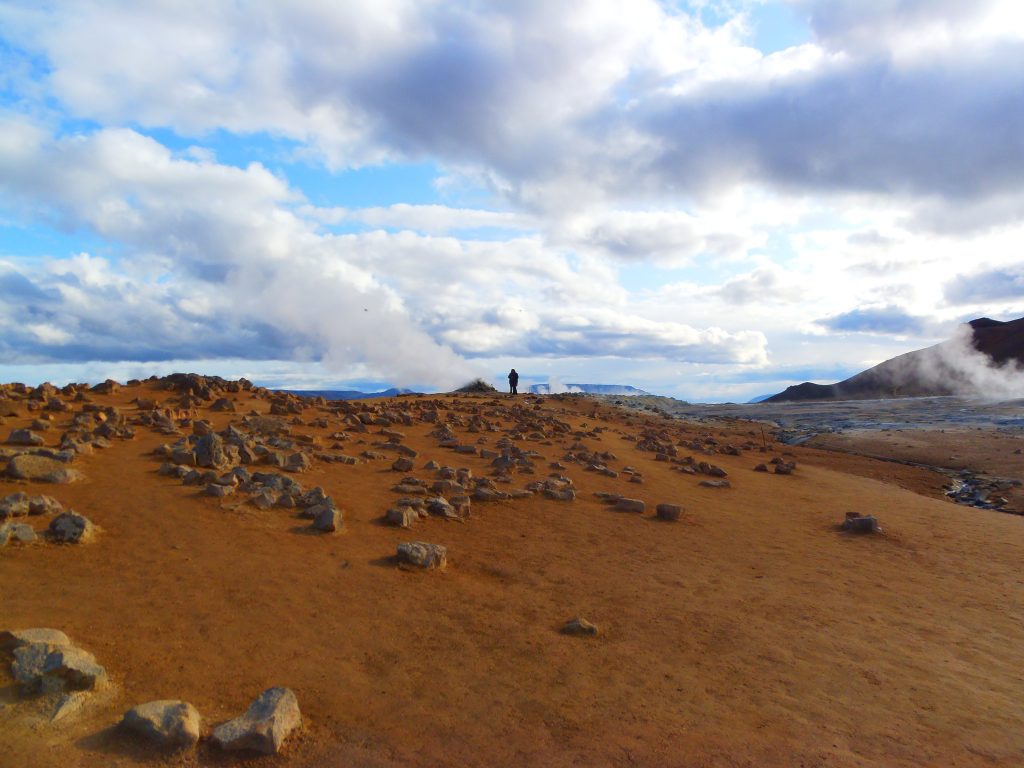 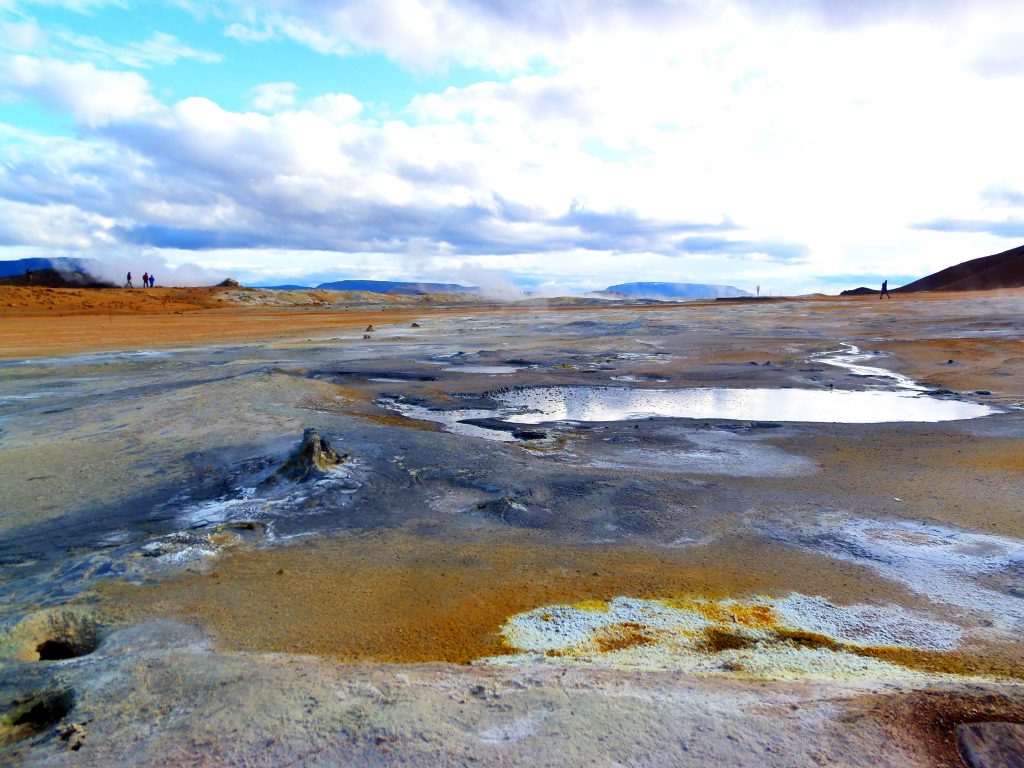 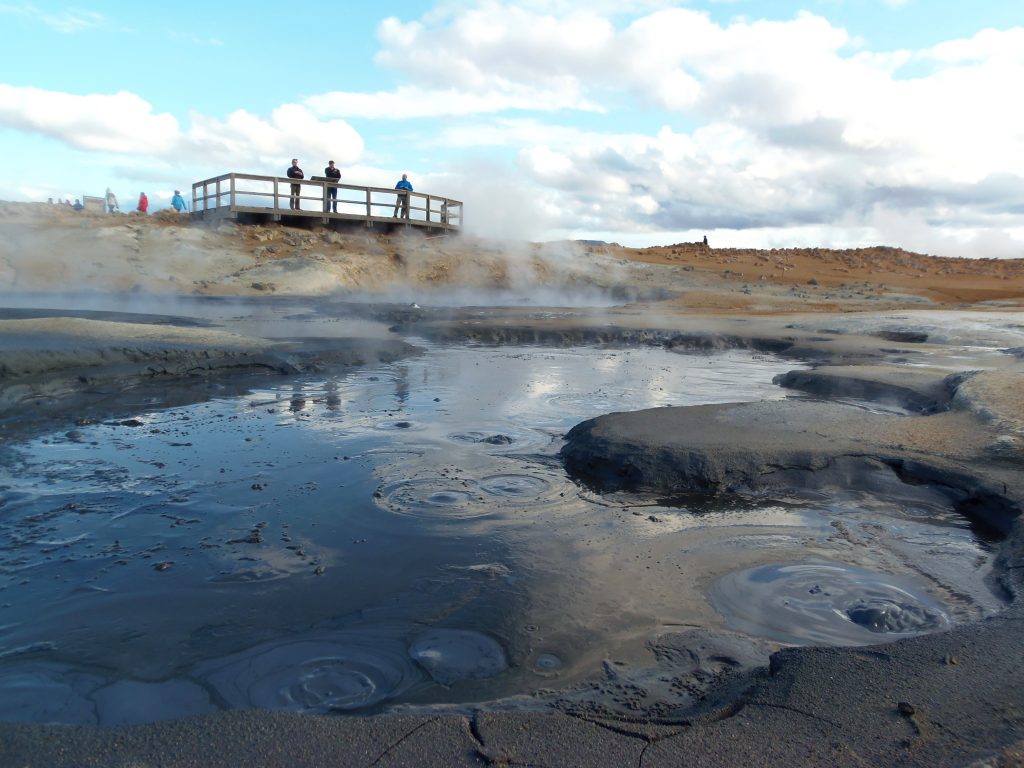 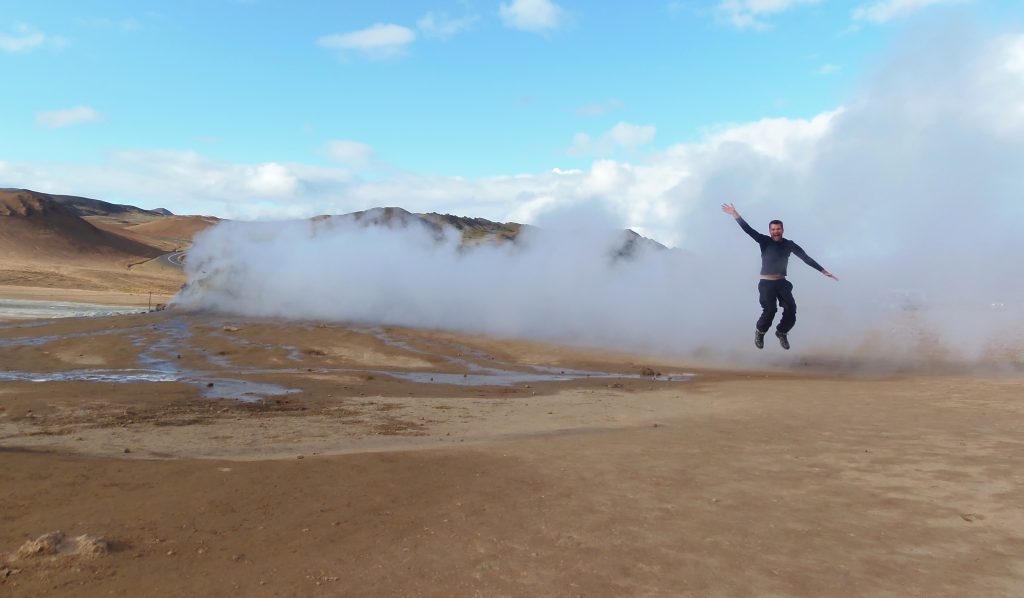 From here we went to our third and last stop in Myvatn: the Viti crater in Krafla. It is somewhat further away, but as I had seen very cool pictures I wanted to go there. However, perhaps by my expectations, I was a bit disappointing. It was, after all, nothing more than a lake that had occupied the ancient crater of a volcano. Anyway, we enjoyed the ascent and good views. 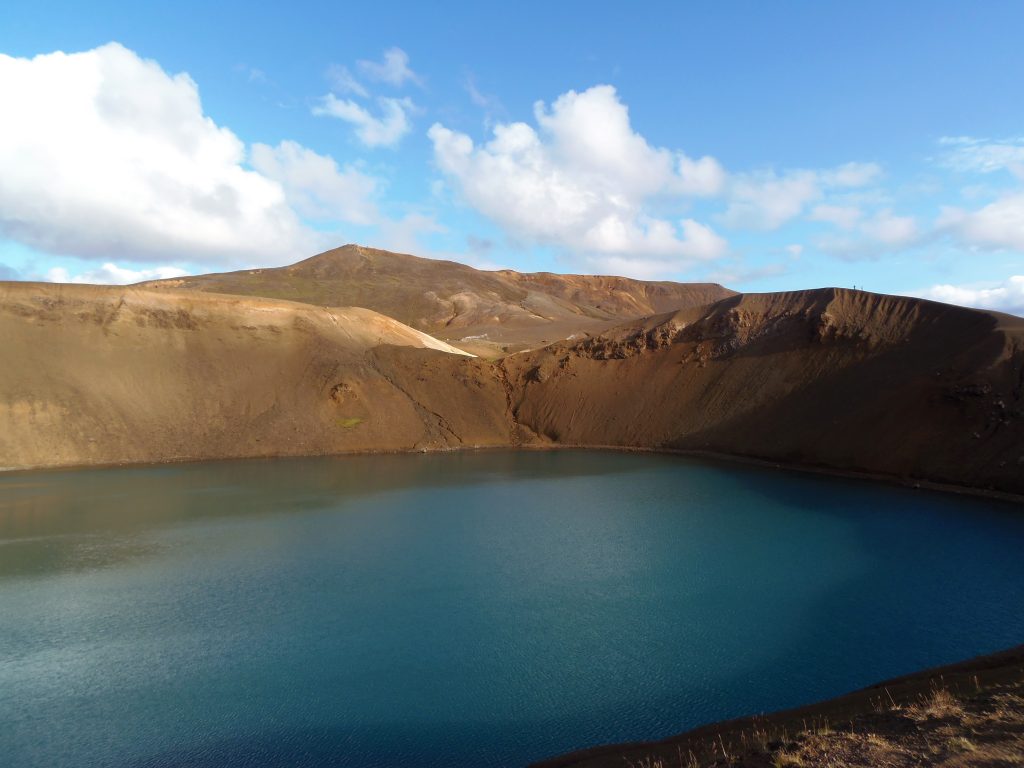 Our next stop was Dettifoss, for which you have to turn slightly north and drive on dirt roads. In September 2014, when we did the trip, the Bardarbunga volcano had erupted (before we travelled we were nervous about the closing of the air traffic, as happened in 2010 by Eyjafjallajökull) and many roads were cut. I remember that this situation caused a lot of nervousness in my family, and it was news coverage in Spain and Europe (both in 2010 and 2014). And the Icelanders were so damn relaxed, hey. So calm and accustomed. In fact, before going to Iceland I called the consulate and they told me not to worry at all, that was normal and that there was no risk of anything. I think it even increased my level of excitement of the trip, reading in the newspapers the news about it and the roads cut. 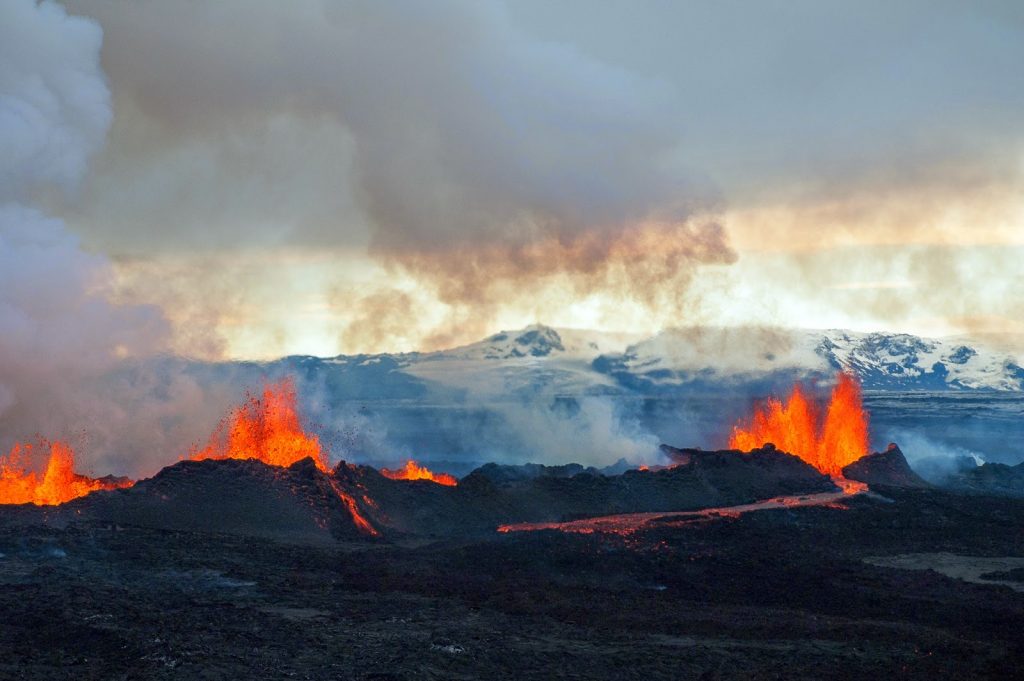 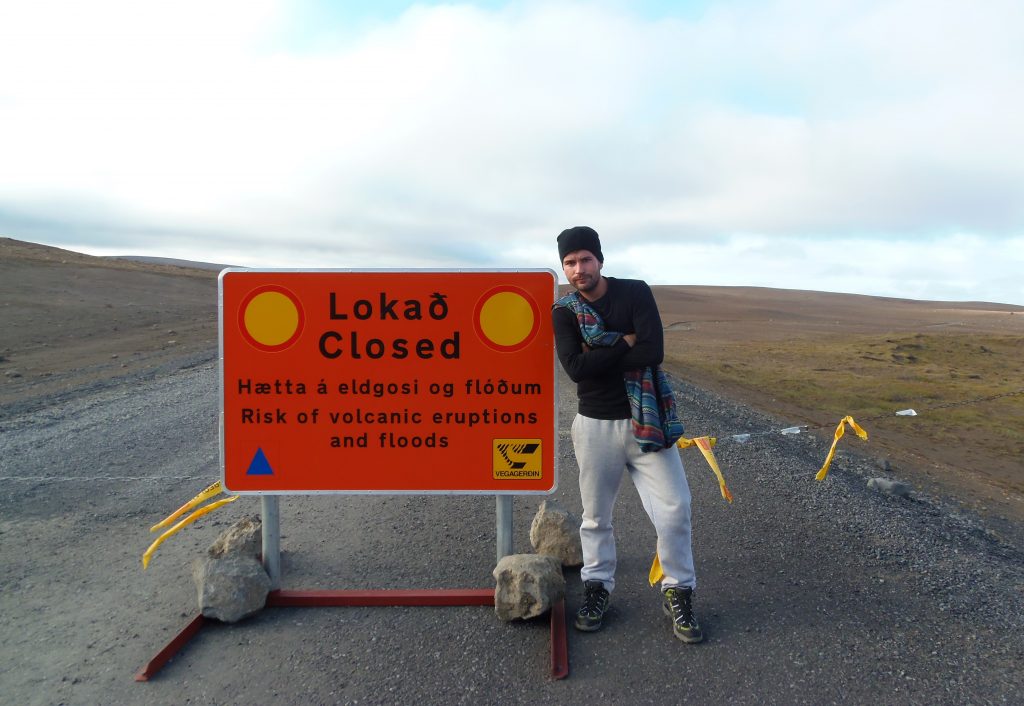 Cut roads because of risk of volcanic eruptions and floods, near Dettifoss.

Dettifoss is considered the most powerful waterfall in the country. As I said, it is a bit away from the main Ring Road, but it is worth it. It is striking the landscape of blocks of stone in which it is, and the thunderous force with which the water falls.

Dettifoss, the most powerful waterfall in the country. 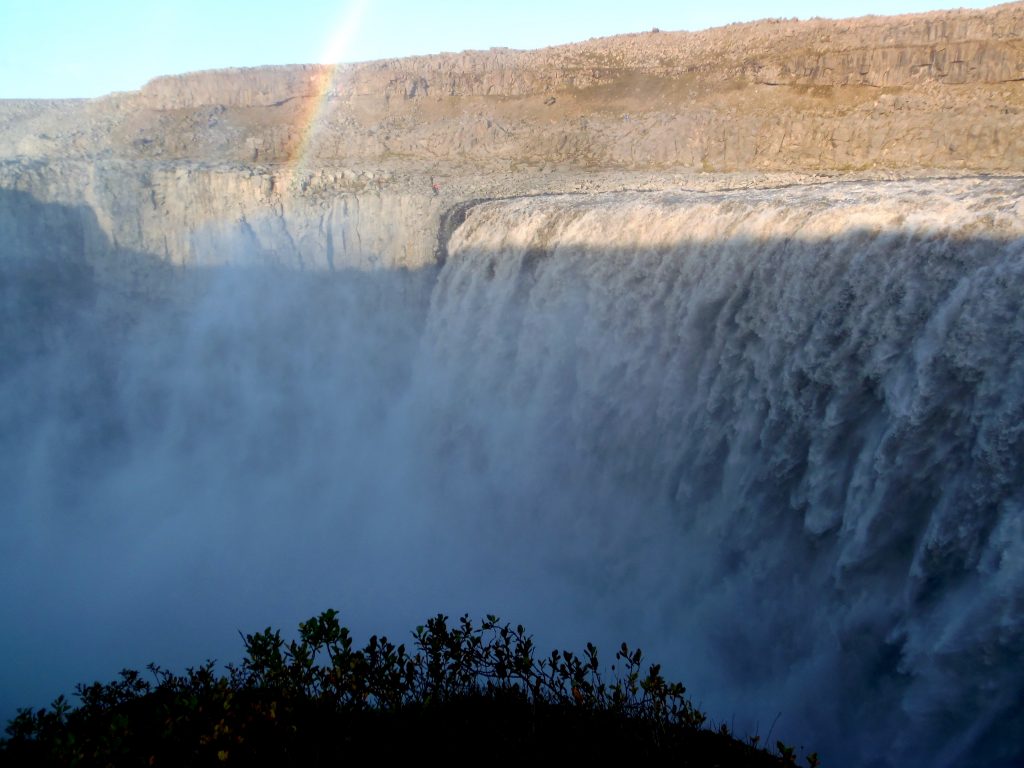 From here we start the journey to Eggilstadir. All this journey is a real demographic desert: there was nothing on the road. Practically no sheep or anything, so get your tank full if you need it because until Eggilstadir it will be difficult. This village has nothing special, it is simply a communications junction and a place to refuel and have dinner. We did it in a pizzeria, and we continued our way (at night) to Seydisfjordur, where we had the hotel. The road to Seydisfjordur is mountainous. Although on the map it seems to be close, you have to go up and down mountainous terrain, to get to the fjord where it is. Through this crossing, we were lucky to see in the sky a very timid aurora borealis. At this time it is not common, but with a very clear sky and on top of the mountain road we managed to see a very dim green light arm, but we could see the color on the black sky. It is a pity that my camera could not capture it, but I leave you a photo of what the northern lights are like in Iceland: 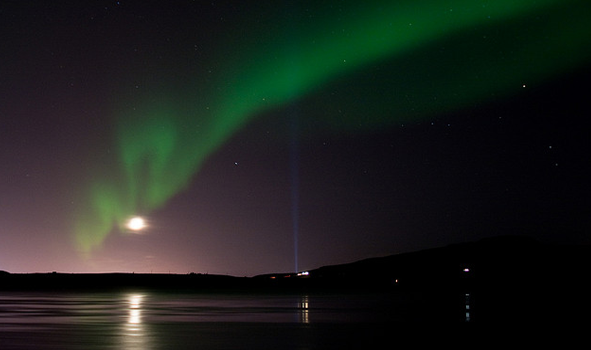 Something like that is what we could see. It had no curvatures, it was just a green wake. Source: northernlightsiceland.com

Our hostel that night in Seydisfjordur was the Nord Marina Guesthouse. I do not recommend it: it is remote, in an area like a rusty ship and is very tatty. Read how was our next day by clicking here.