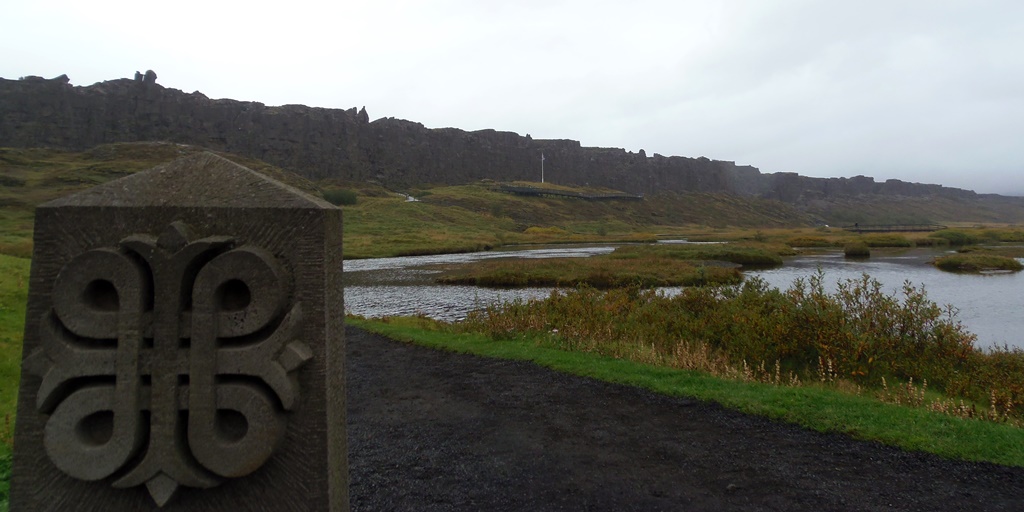 We go over the last section of the Ring Road. It includes 289 km of a varied journey among waterfalls, geysers, faults, Viking scenes, and the sophisticated capital Reykjavik. 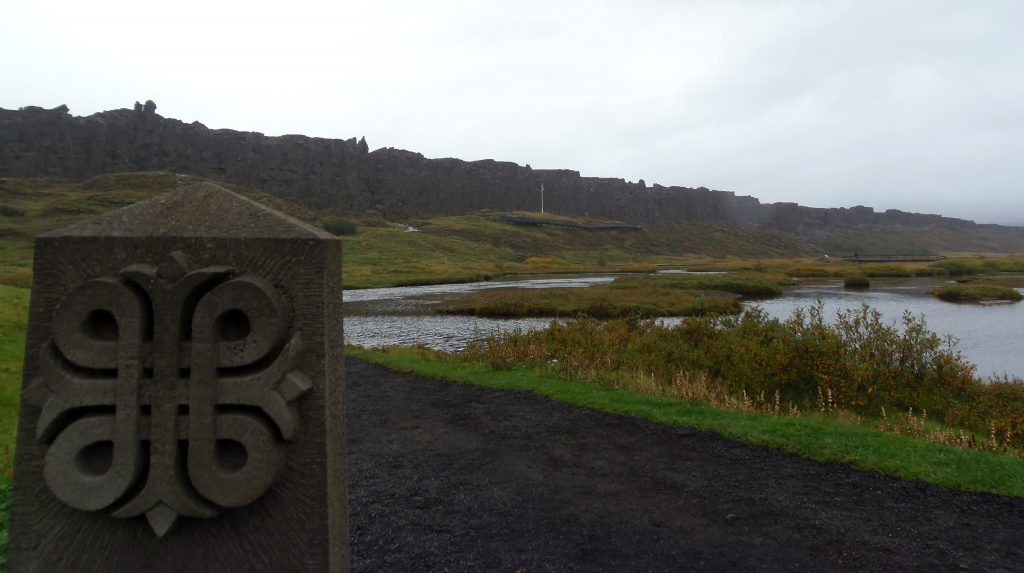 We finally left our awful hostel in Vík (you can read here the previous article) and we started our last day driving on the Ring Road. Our car (Hyundai i20, rented from Geysir) was a good one and we had had no problems at all with it. We were sad to give it back!

First sight of the day was Skogafoss, the waterfall near Skógar. We had bought in a supermarket and had breakfast here, while watching this beautiful lonely waterfall that seems to appear breaking out of nothing. There are stairs to climb to the top and get some good views. 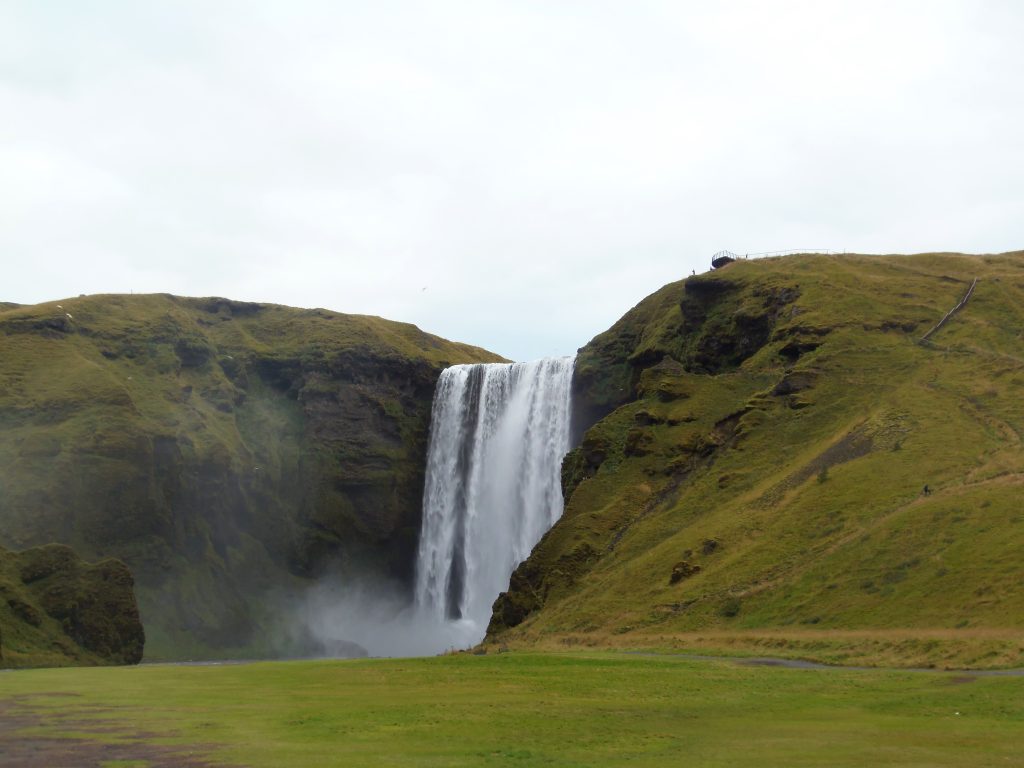 We moved to the close town of Skógar, where the best thing is to visit the open air museum. It consists on some typical black wooden houses with white windows, whose roof is covered in grass (something characteristic of Icelandic villages, it appears in many souvenirs and postcards). When we arrived it was raining and it wasn’t so early in the morning, but the visitor’s center was closed (or at least, nobody was there). I really wanted to visit it, so we got into on our own and walked pleasantly round the village, watching the houses, its plots, stables, etc. Some of the houses were open, and we could see the inside: one was like a sort of wood store, another one was a little room with a desk and two beds. Furthermore, at the entrance of the museum, outside the fence, there is a long whale bone. 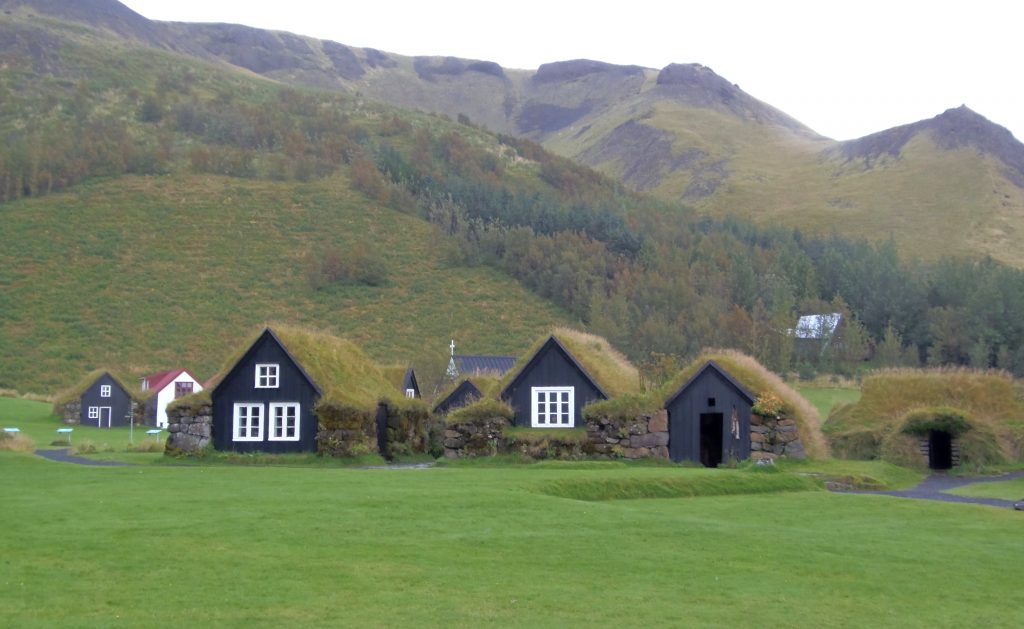 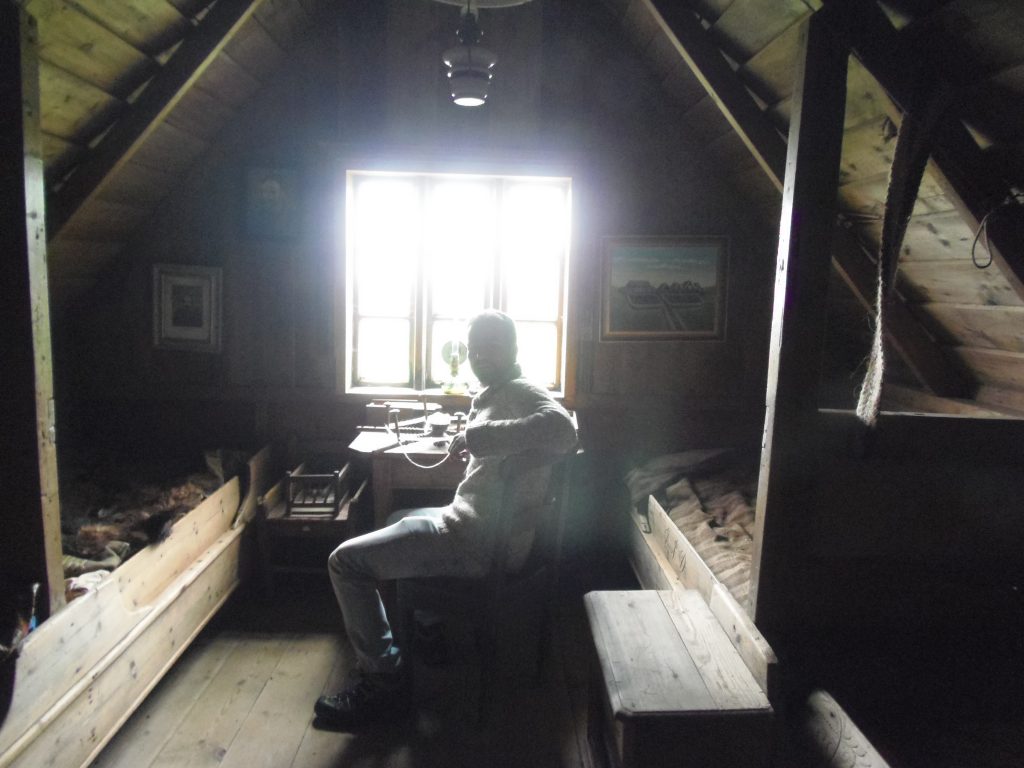 Inside a little house.

West of Skógar, Eyjafjallajökull volcano and its area take place. Its eruption in 2010 caused the shutting of the air space during weeks because of ashes all over Europe. So we were looking right respectfully.

I had read that in our way from Skógar to our next stop Gullfoss, there was a waterfall called Seljalandfoss, and although it was not anything extraordinary, it was just on our way (near from Skógar, exit to road 249). So we decided to stop and see it, and it was a good decision. It is a beautiful view (we loved visiting waterfalls, above all coming from the so dry region of the Southeast of Spain). In this waterfall, in particular, you can walk inside and round it. From inside, we could take some cool pics. 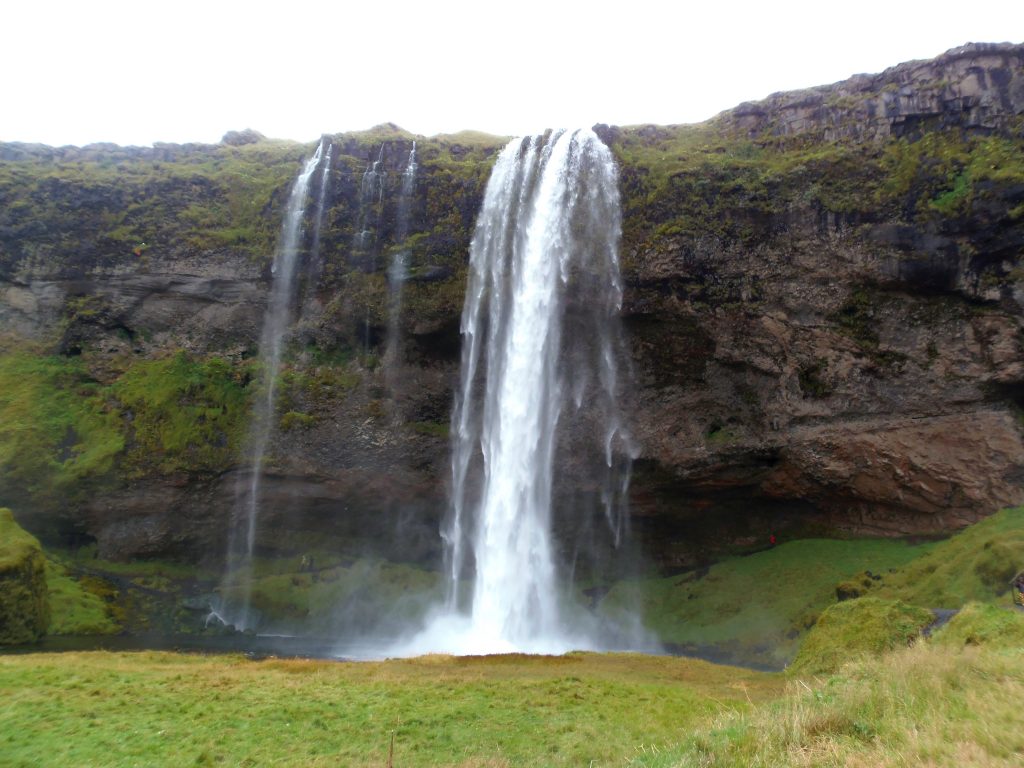 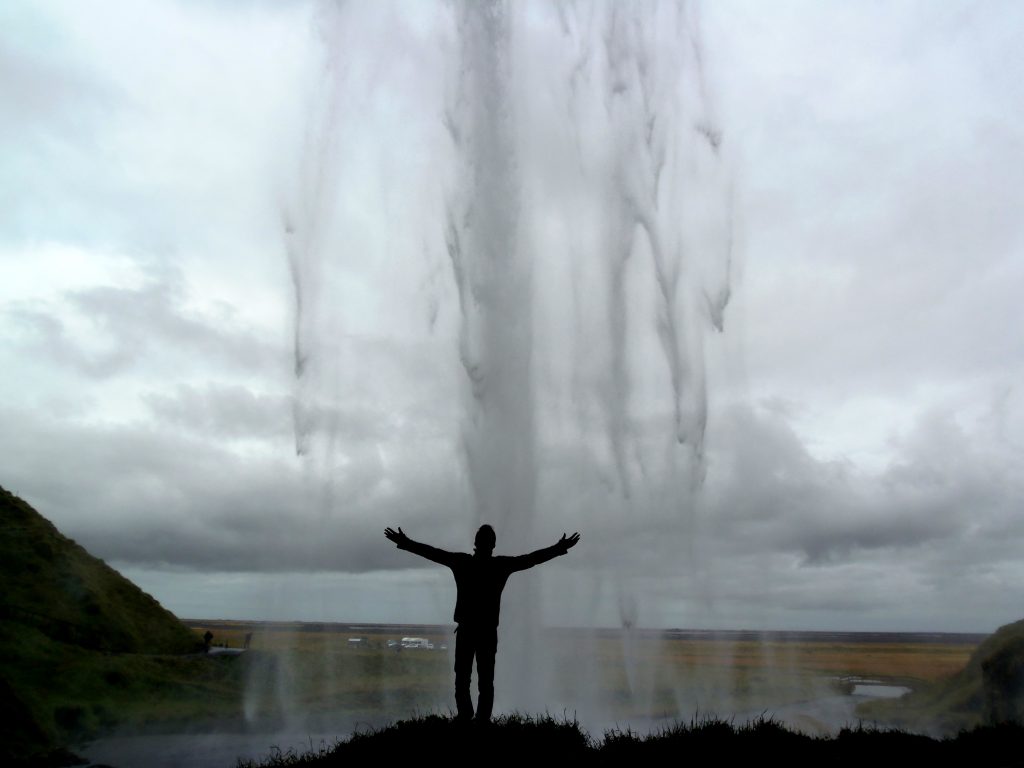 From here, to go to Gullfoss, there are some roads and all of them are paved. We chose road number 30. Now we enter the busiest area of Iceland, the Reykjavik region and the so called “golden ring”, offered as a good itinerary in Iceland by most of the travel agencies. Without any doubt, it might be a good option for those who don’t have much time in the country, or if they are unable to drive the Ring Road. The golden ring usually includes Gullfoss, Geysir, Thingvellir, Reykjavik and the Blue Lagoon. However, I insist on chosing the Ring Road if you have the possibility, as you will see the whole island, variety of landscapes and you will have more liberty. Therefore, in this part of the road there was more traffic, places were crowded and there were several coaches in each place.

On our way we stopped to greet some Icelandic horses, easily recognizables because of their short size and unique hair. After this, our loneliness ended as we arrived at the double waterfall of Gullfoss, which would be our last waterfall in Iceland. As I said, it was crowded. 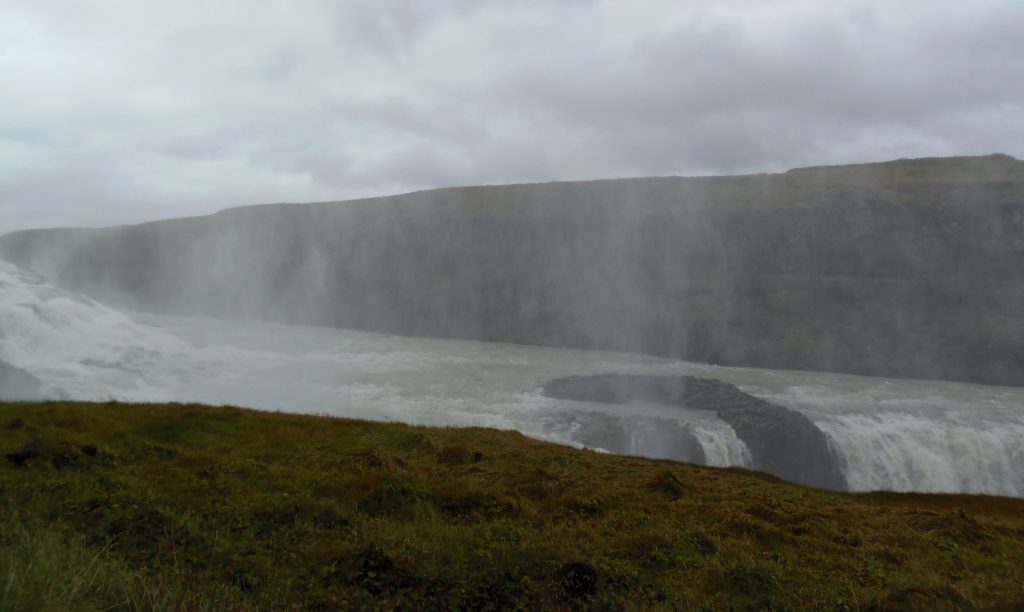 Water in suspension in Gullfoss. 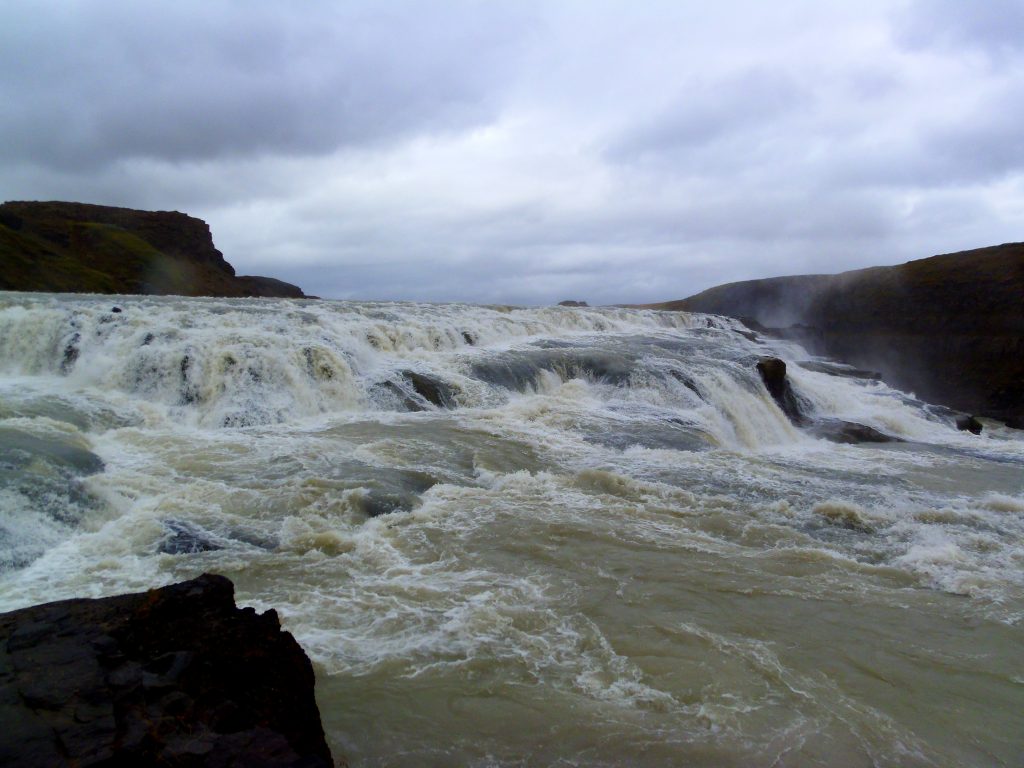 Gullfoss from the nearest sightpoint. 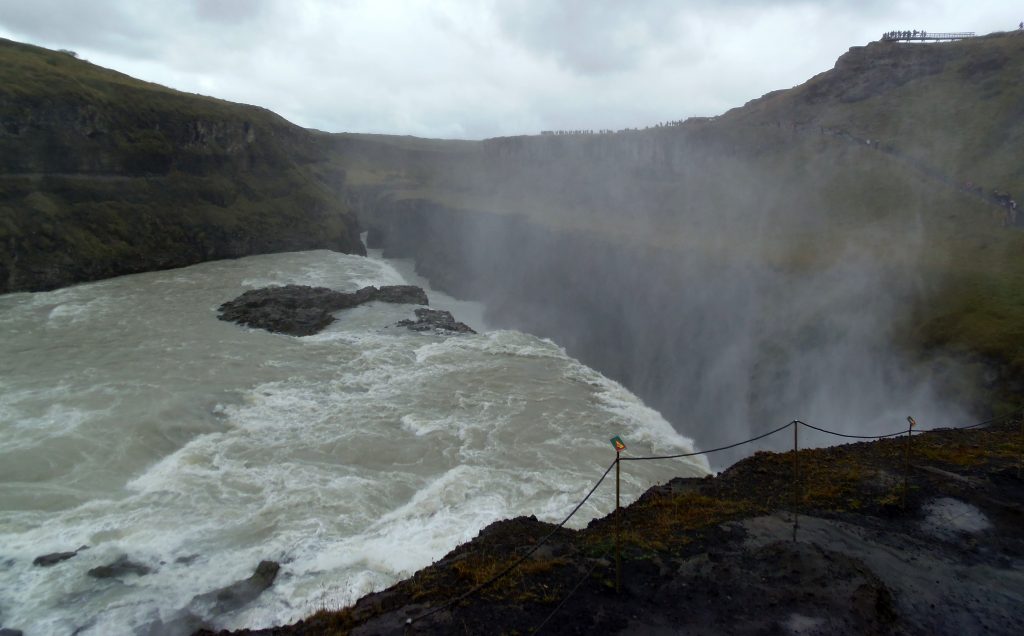 We said goodbye to Icelandic waterfalls in Gullfoss.

From Gullfoss we took road number 35 to go to Geysir, a place that, like its name shows, contain geysers. In fact, the name “geyser” is called like that because it was here where they were discovered and the name exported to the whole world. It was noon and we thought about visiting the geysers first and then have lunch, but just when we were entering the park, a whole bus full of Japanese arrived, so we preferred to do it reverse in order to avoid the crowd. We had lunch in the visitor’s center (outside the park), it has also a gift shop full of souvenirs, and it caught my eye what they were selling there: cans of fresh Icelandic air! €5 each one. It was not a bad idea! 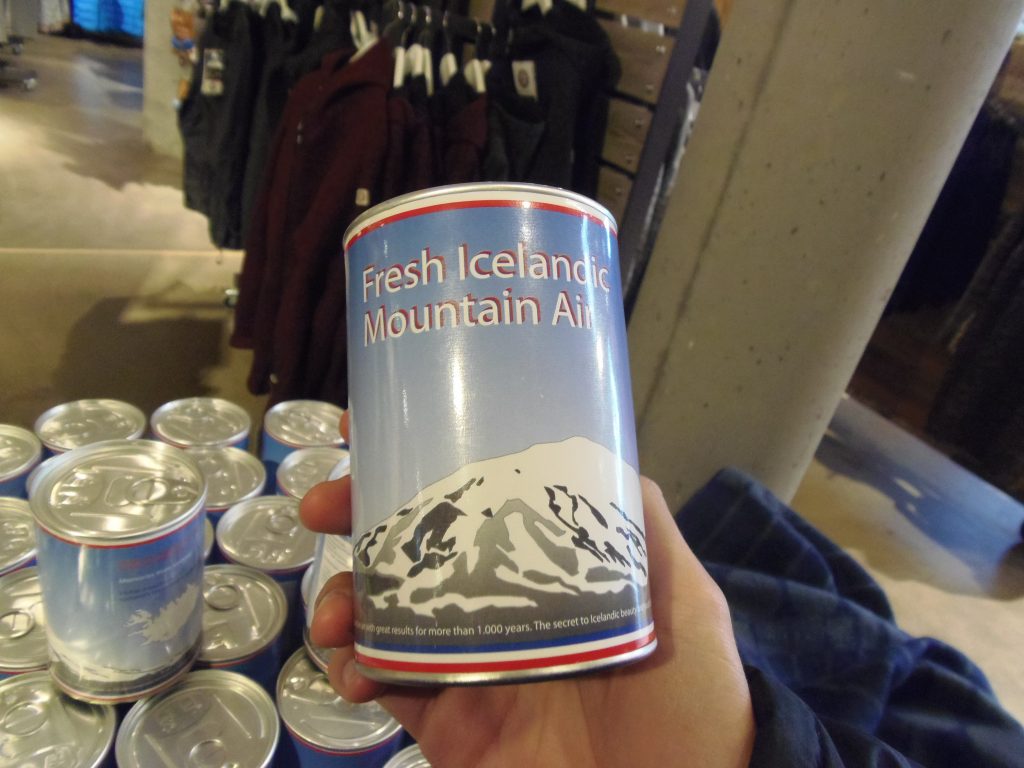 It was, at least, original. Come and get one before I run out of them!

Once we had lunch and visited the shop, we got into the park. A sign gave us some warnings and caution measures. But despite them, some geysers were full of coins (I really don’t understand why they throw coins and try to get lucky by marking that luckmaker dirty); they warned us that water is 80-90ºC and it will burn (hmmm… really?); and not to test it because it will burn badly (and obviously I did it, and I can assure it burns).

Warnings in Geysir. The second-to-last provokes you to do it.

Here you can find several geysers, small ones (Litli geysir) and big ones. There was one in the past, which was the true big geyser, but it died long ago. Everywhere is fenced for people not to approach too much, so they stand round them, which can be a difficulty if you want to take some good pics. The biggest one, Strokkur, emerged every five minutes with a height of 20 meters approx. In addition, the ground emited gas as if the ground was burning, and there were more places with water that used to be geysers, currently dead. 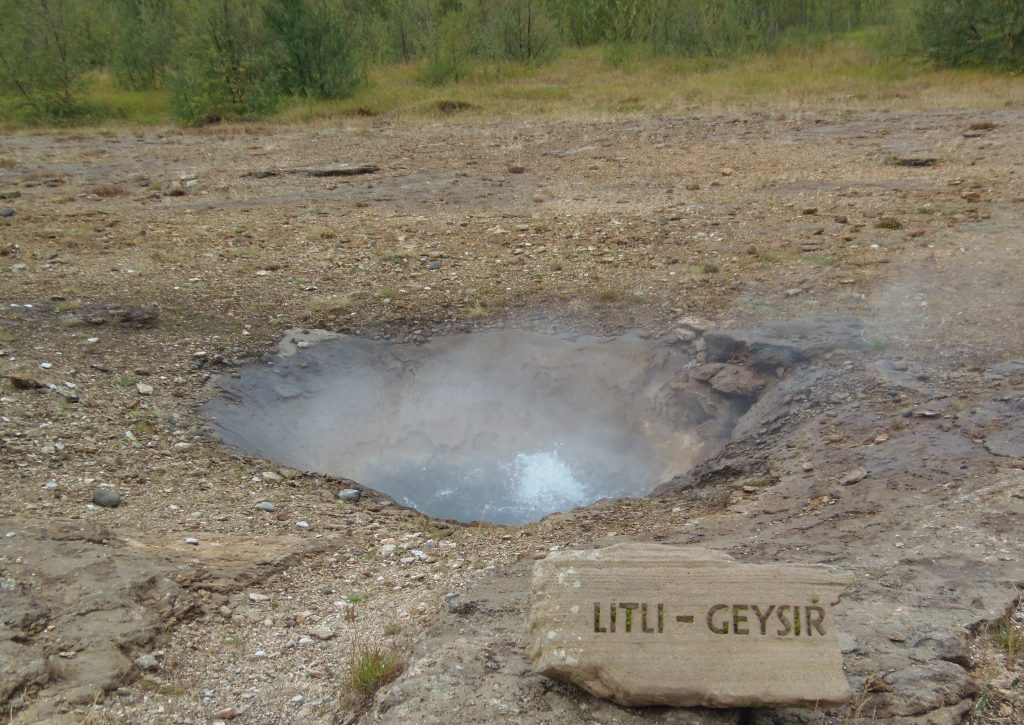 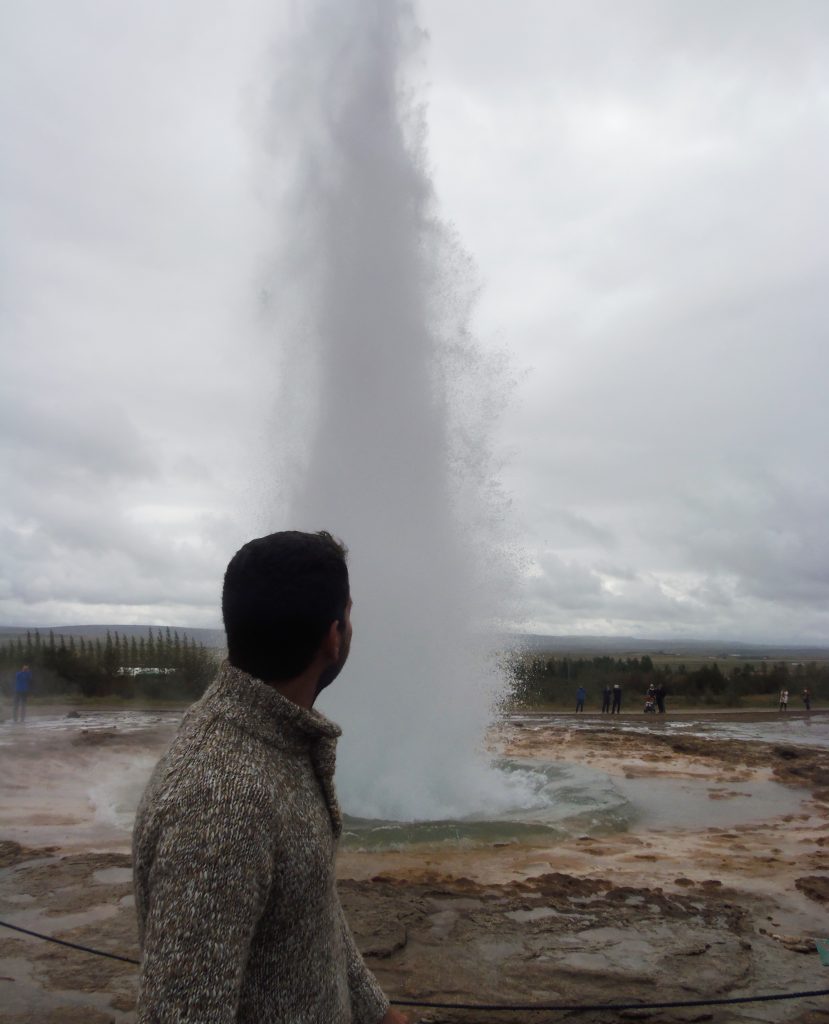 Strokkur, now the biggest one. 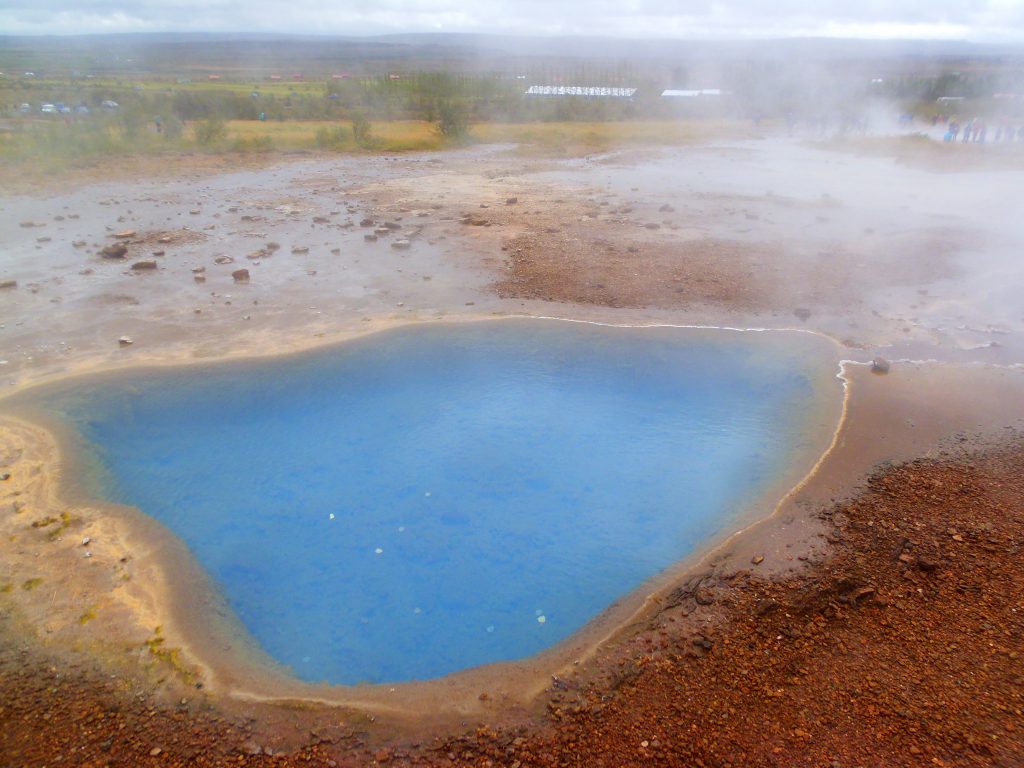 Boiling water that used to be a geyser.

Our next stop was Þingvellir or Thingvellir, National Park since 1928 and World Heritage site since 2004. The historical importance of this place is very high, and for Icelandic people, it is one of their identity signs and one of the most loved places. To get here, you can take road number 36.

Thingvellir marks the place where since the X century, Vikings gathered to discuss politics and other tasks. They constitued the Assembly or “Alþingi”, where they discussed laws and found solutions to conflicts. It was also here where Iceland proclamed its independence in 1944. Therefore, it is a symbolic place for Iceland, and they are proud of being the “first democracy” in the world. I had high expectations to find some monument of Vikings, or something touchable to better feel History. In part, I felt disappointed because there was nothing more than a visitor’s museum that didn’t focus much on the Vikings, but on the whole of Iceland itself, its formation… But then I lost that sensation as I started to read some panels and trying to imagine how everything was with all the Vikings walking over there. In particular, one showed that in a sort of dam of the river, they drowned guilty people there (it was the drowning pool). 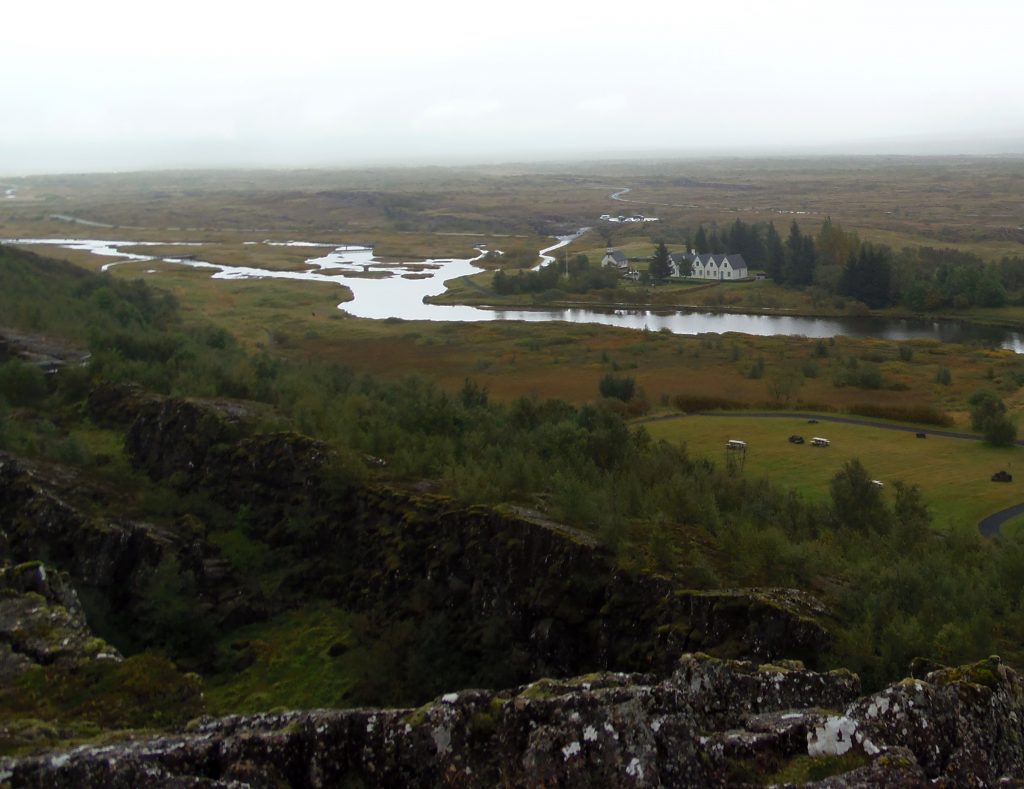 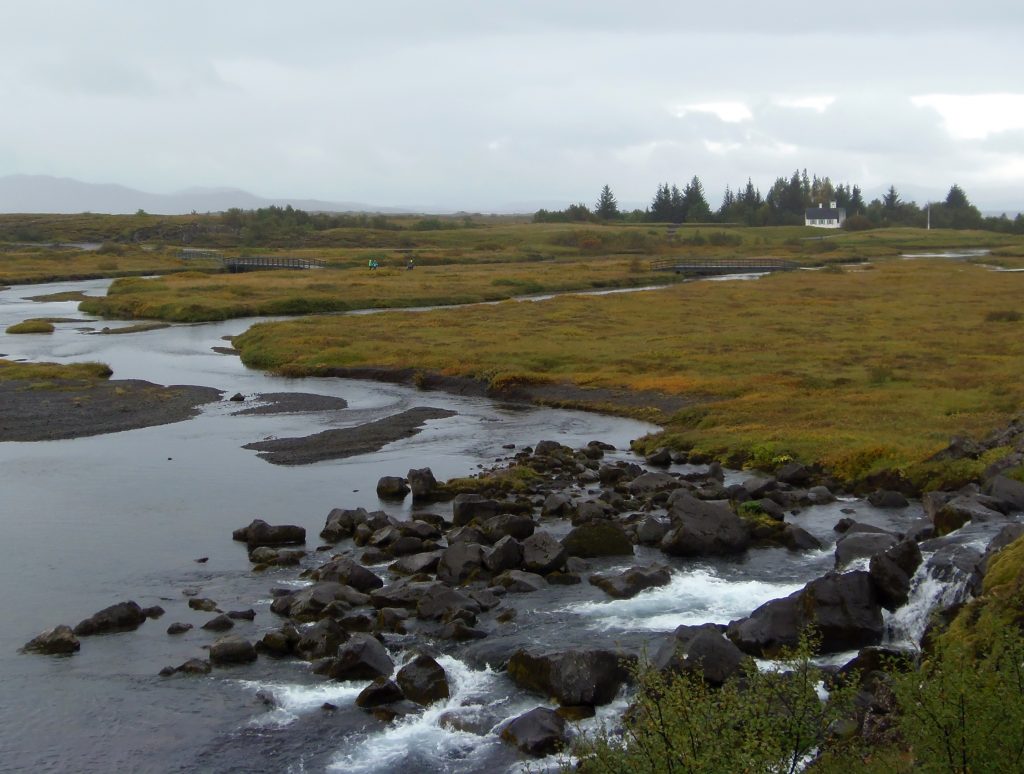 Just here you can find an Icelandic flag, and it was the drowning pool. 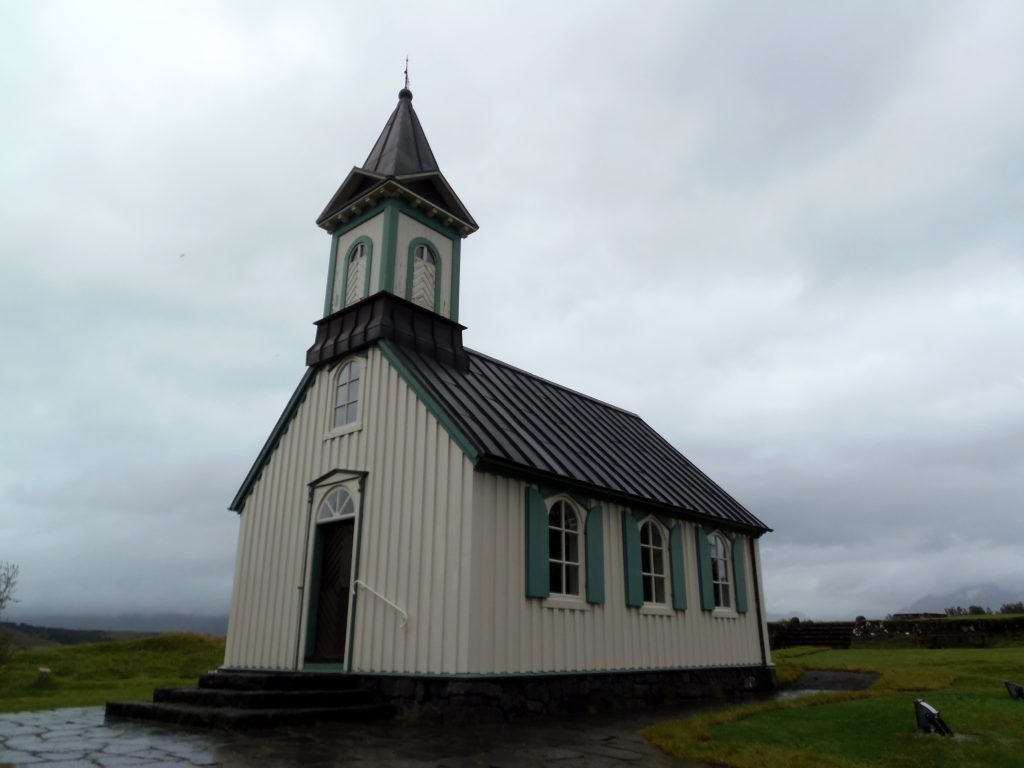 In addition, the Thingvellir surroundings are known for being the tectonical frontier between Europe and North America. It is a divergent border, continuation of the Atlantic oceanic ridge, and it is constructive, that is, it expels material from the subsoil and creates continent. This is how Iceland emerged. You will see many pics of signs telling you are now in Europe and now in America, but that is pretty fake. The frontier between them is not something easy to establish, but a gradual and slow transition: a space of opening between the borders that expands the soil and that’s why it is so difficult to point out the exact boundary. But it is true that this area represents that, and the space in Thingvellir is located just between the separation of the two borders. Currently you can see scarps, rivers and lakes, as water takes all the low places and fissure sites. We didn’t have time to scuba diving at Silfra, but I have seen some cool pics. 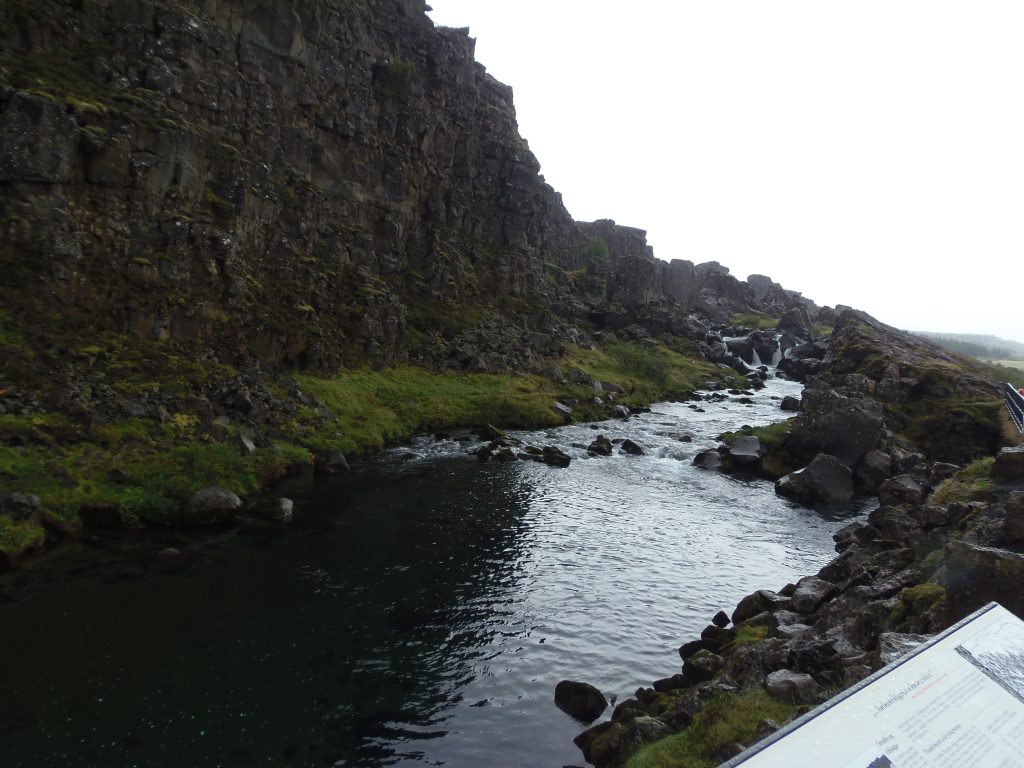 Thingvellir: Viking Assembly and border between America and Europe. 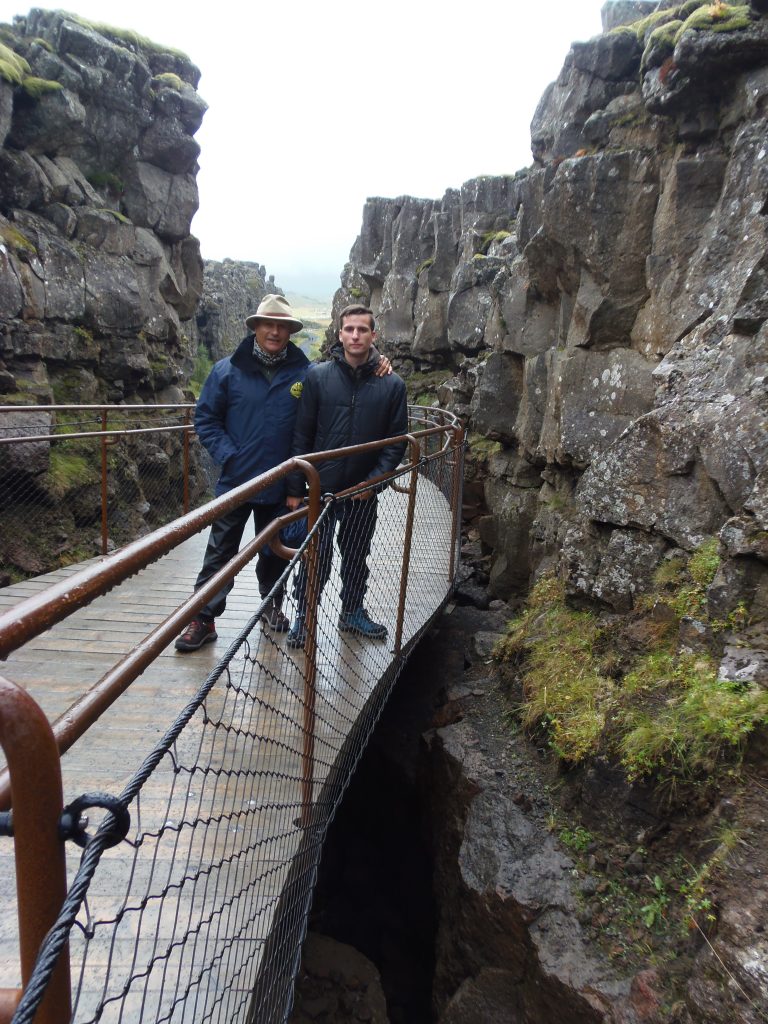 My father and my brother in one of those clefts in the space between borders. 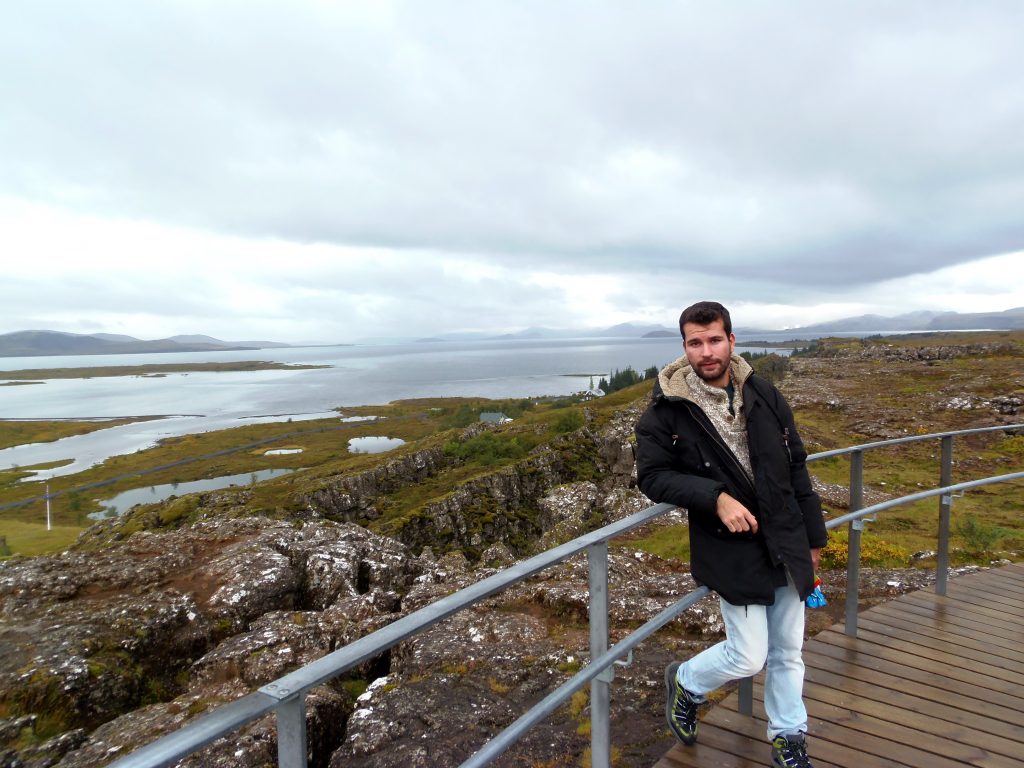 Lake in a tectonical space.

After visiting Thingvellir, we followed road number 36 until Reykjavik, the capital city of Iceland. I will tell you more about Reykjavik here.

I loved walking its streets, visiting book shops (Iceland is the country with the highest index of books bought per person), shopping with trolls or Vikings, and seeing all kind of restaurants, which made me feel in a welcoming multiculturalism. It was already evening and it would darken soon, so we only visited the center. At the end of the Laugavegur street you can find Stjornarradid, the government building, that it used to be a prison in the past, and we find some place to have dinner. 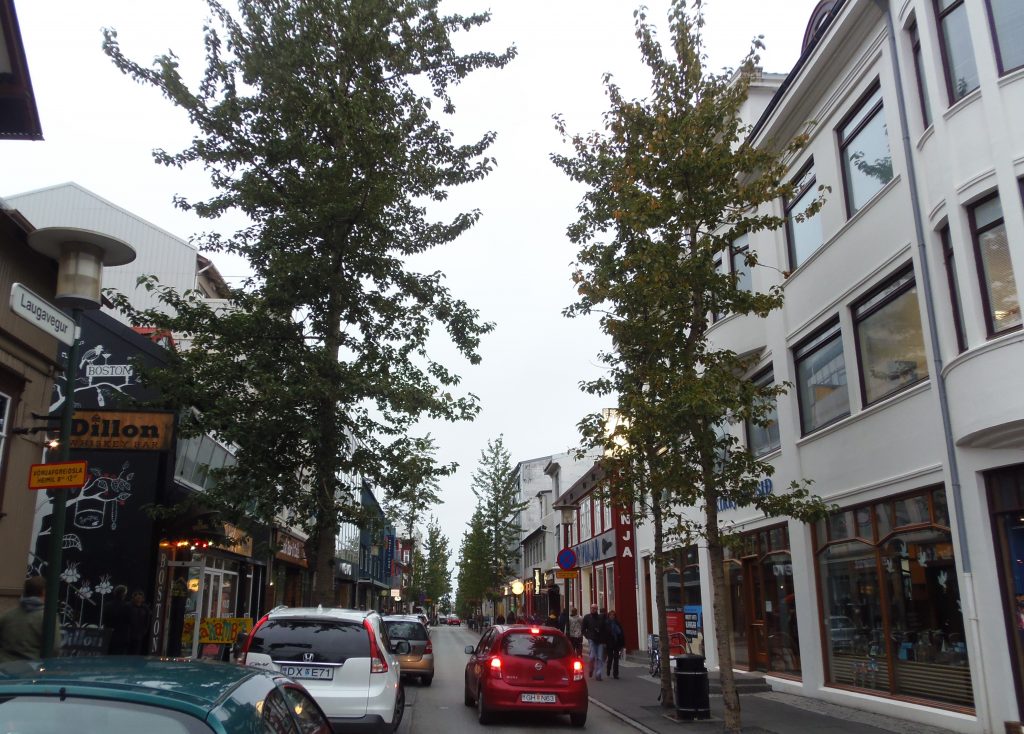 Laugavegur, the main street in Reykjavik. 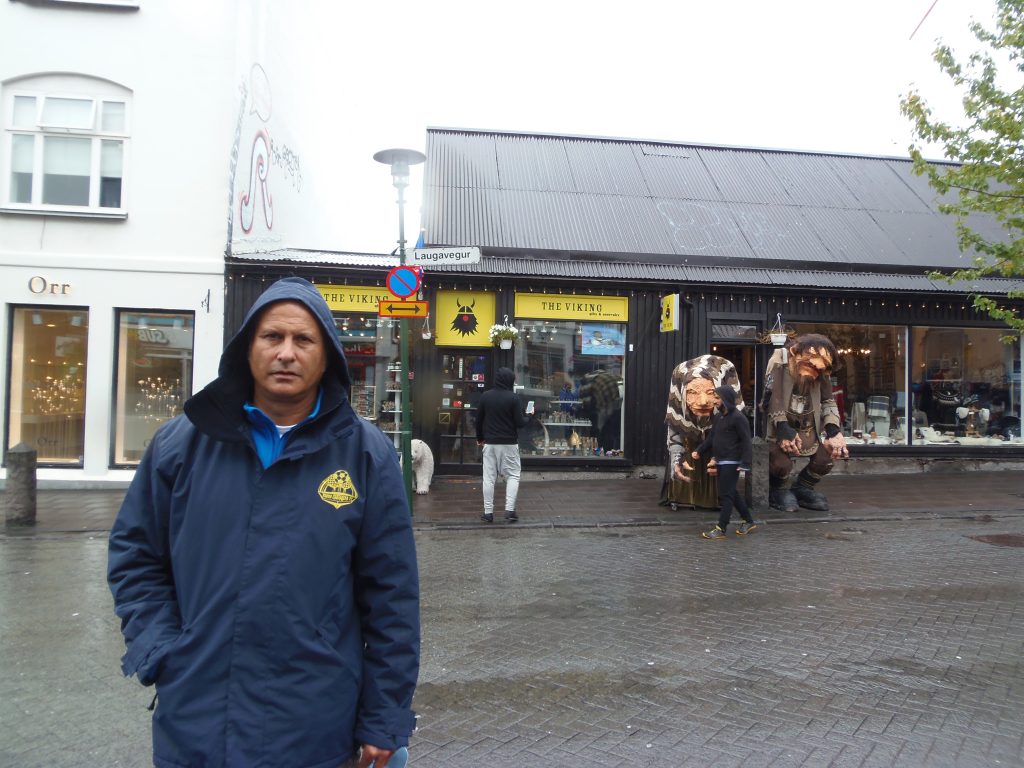 My father with some trolls. 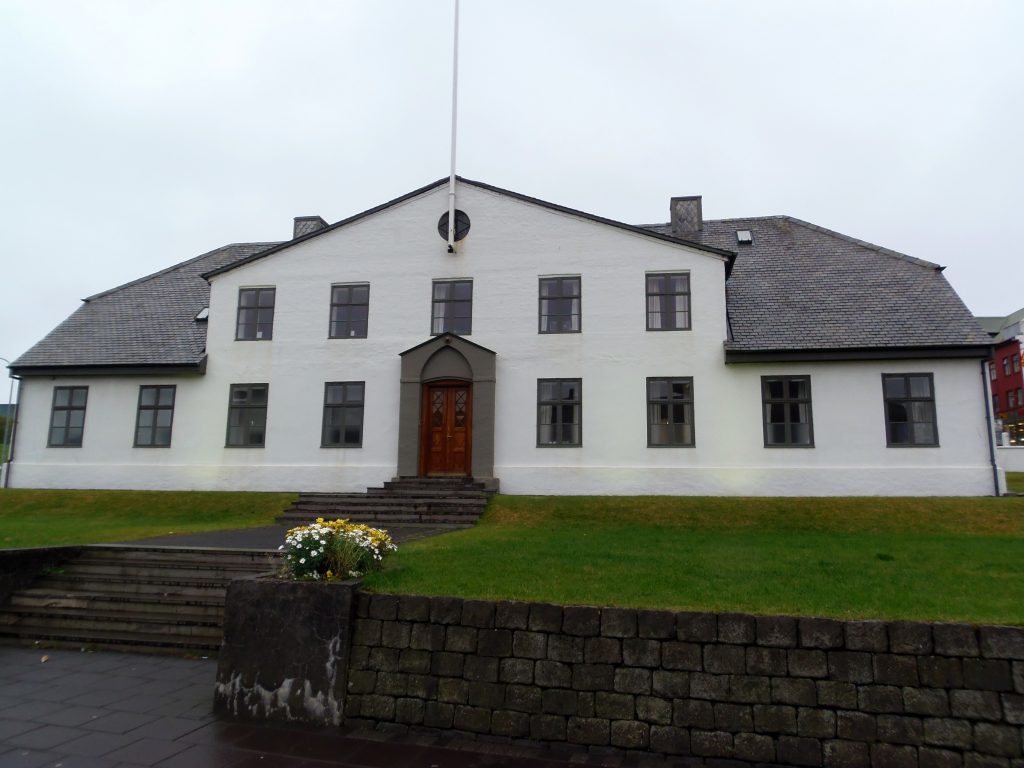 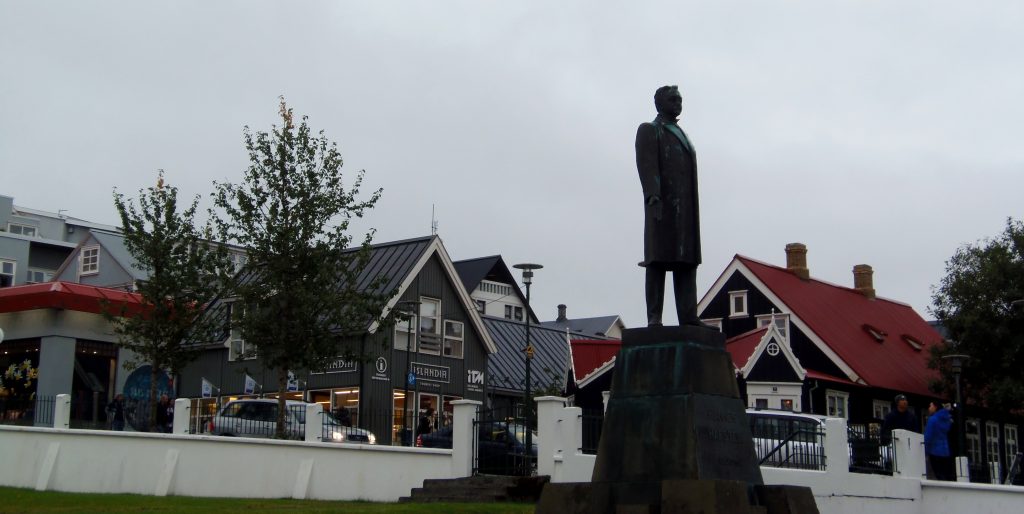 Following the street ahead, you can find the harbour with several pubs and restaurantes where you can taste whale meat. From here, there are also companies to do whale watching. On our way back, opposite the government building, it is the Reykjavik opera, called Harpa, that holds a good international recognition, it won the Van der Rohe architecture prize in 2013. Without any doubt, it is a beautiful and modern building to be seen from outside, because of its futuristic shape and hexagonal glass. We got inside, walked its interior recalling an ice cave, and suddenly we noticed that the show had finished and all the people was leaving. It is incredible how silent they were. We could only hear their steps, and no shouting, crying or noise… 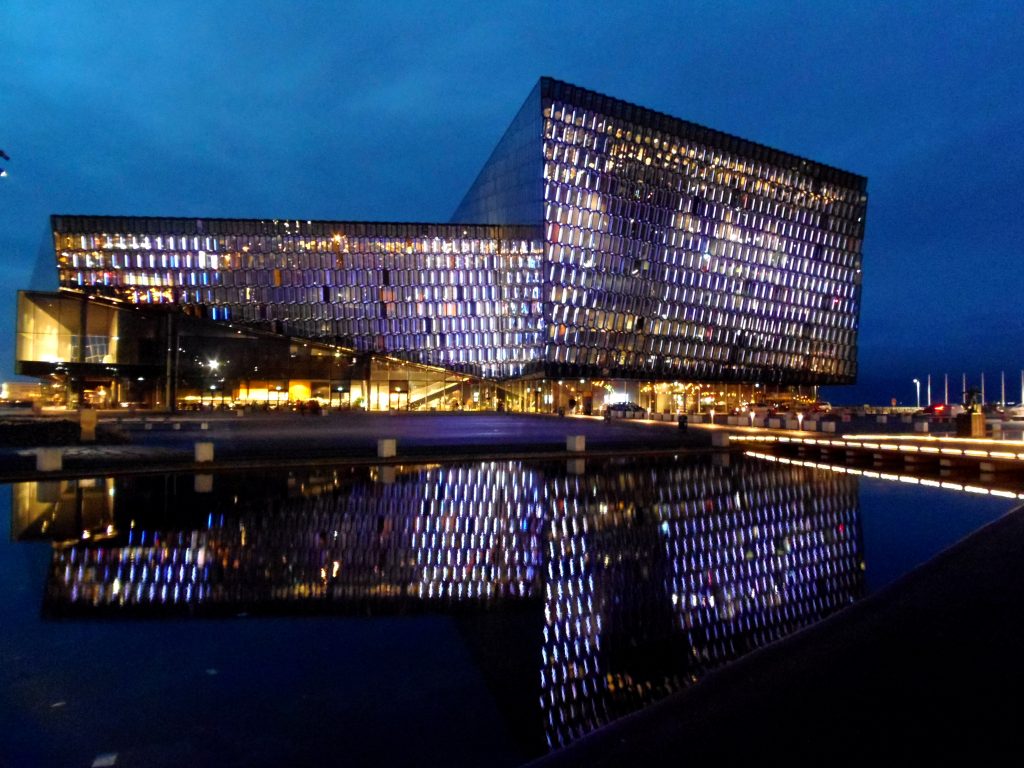 Harpa, the modern opera in Reykjavik. 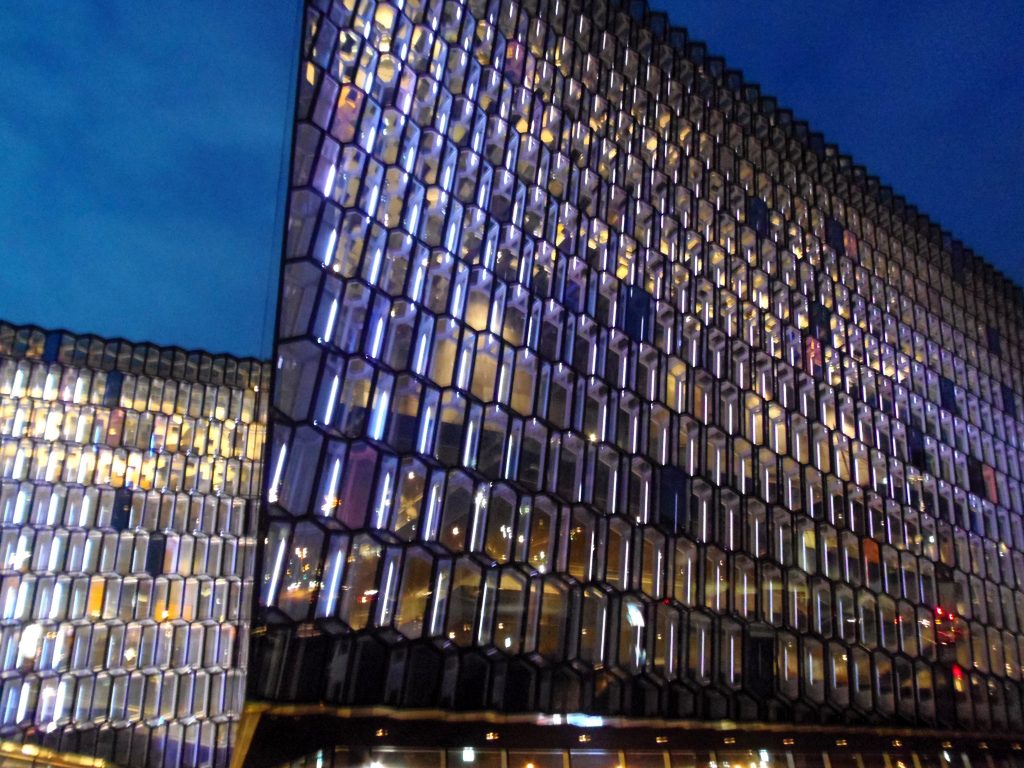 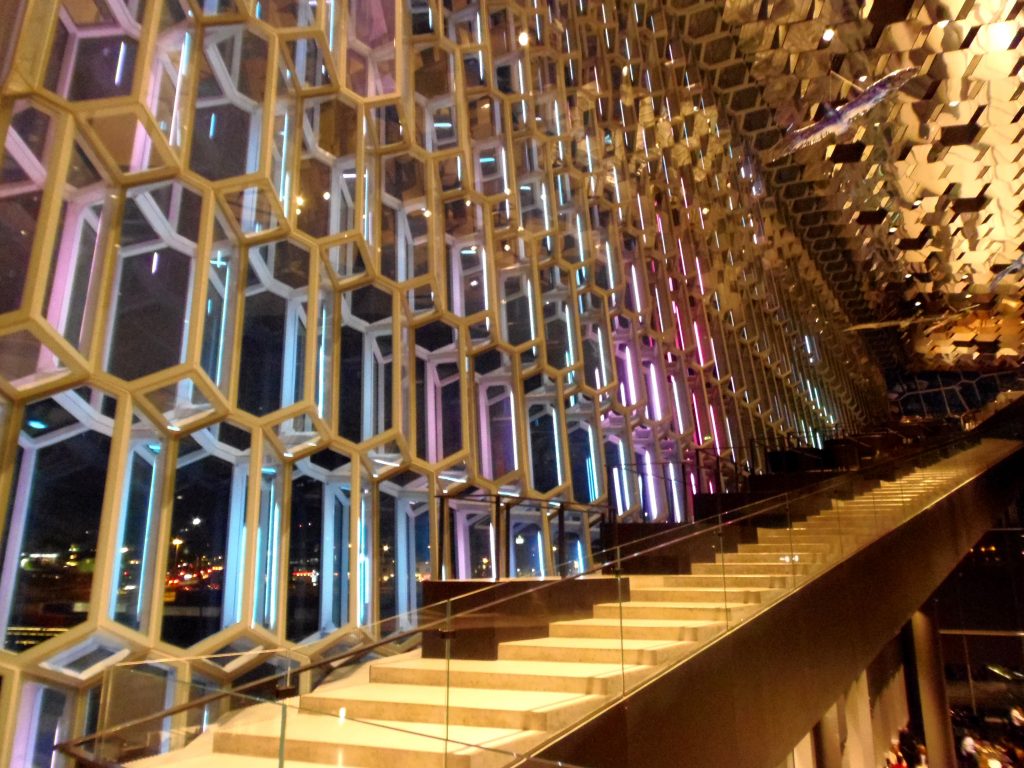 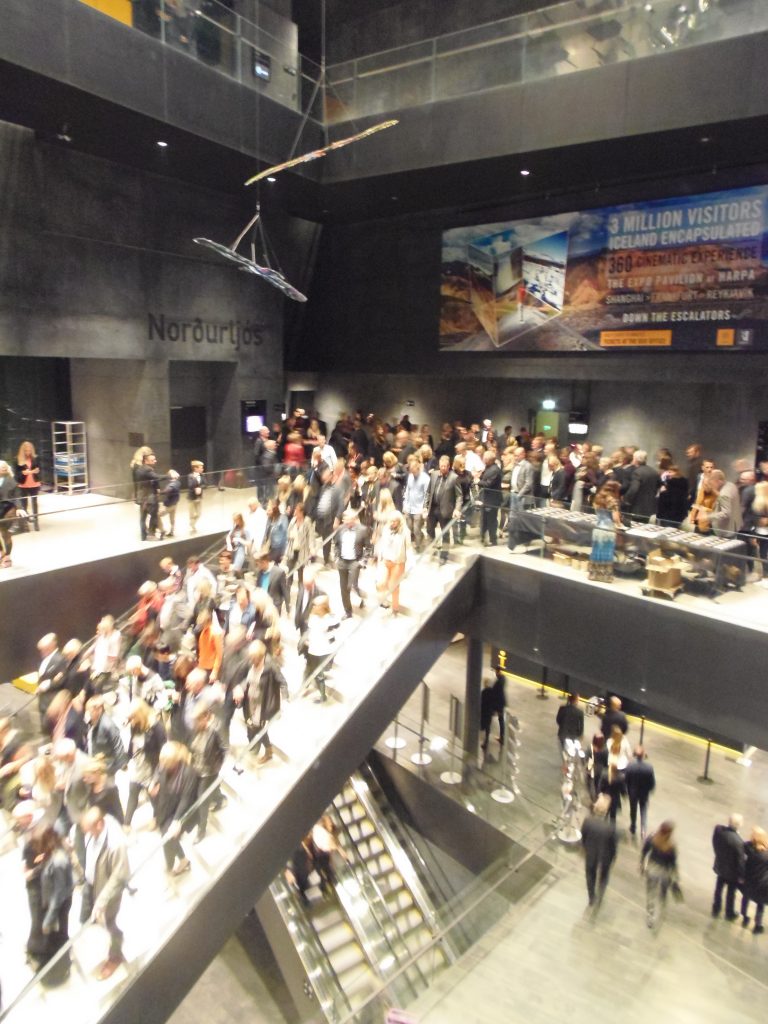 And last but not least, we went to the Lutheran church of Hallgrimskirkja. Then we went to out hostel, the Guesthouse Vikingur, which was fairly ok. The next day we will experience more of Reykjavik, I will tell you more in the next article! 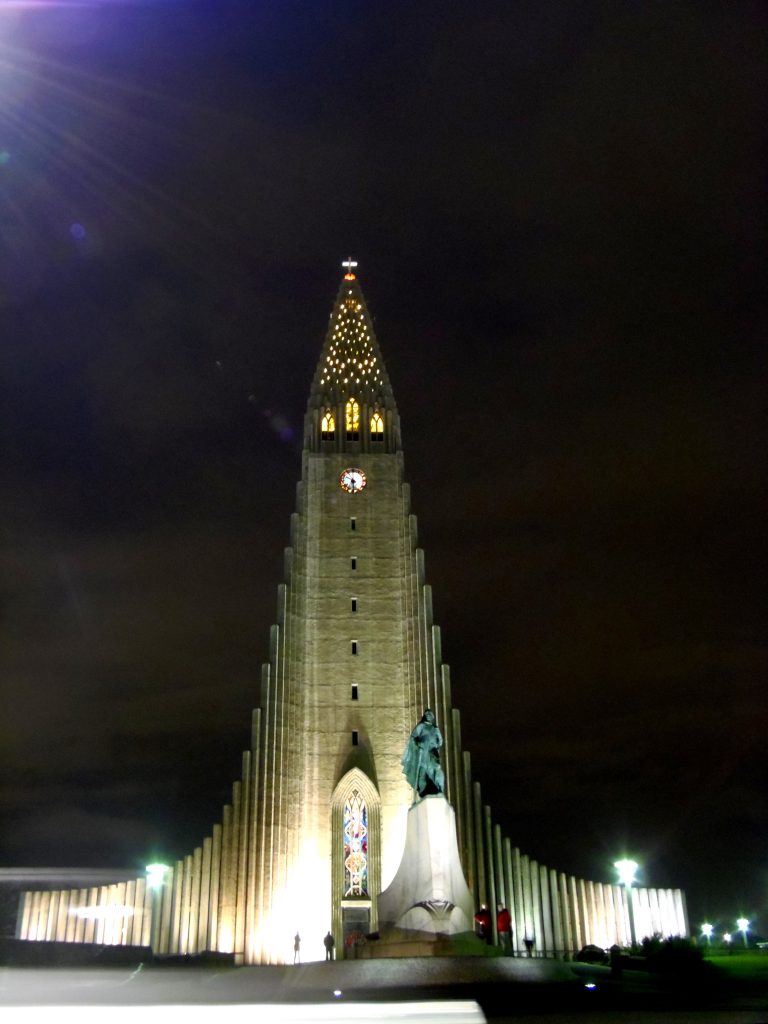 Hallgrimskirkja, the most famous Lutheran church of Reykjavik.