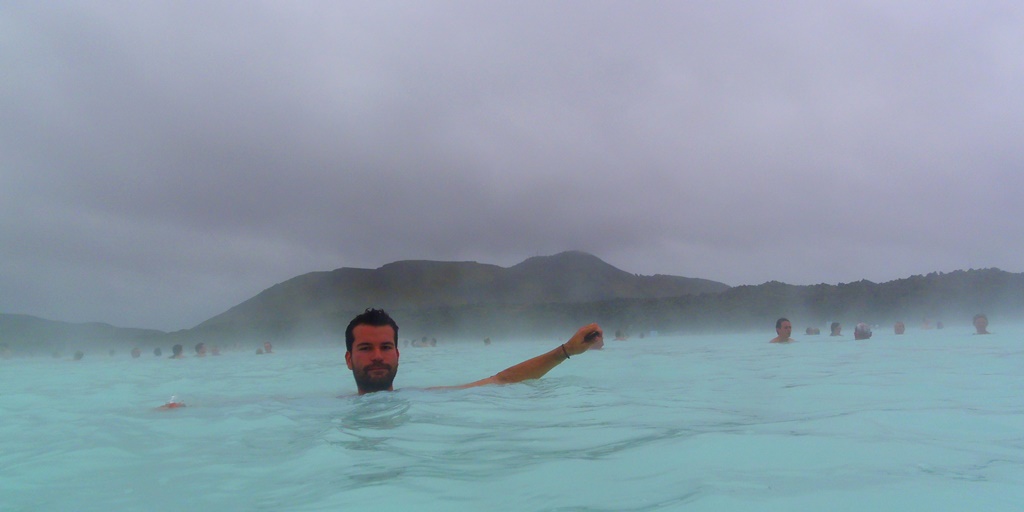 Only 49 km separate the Icelandic capital from the country’s main attraction: Bláa Lonid, better known as the Blue Lagoon. We visit the main sights of Reykjavik and say goodbye to Iceland bathing in the lagoon. 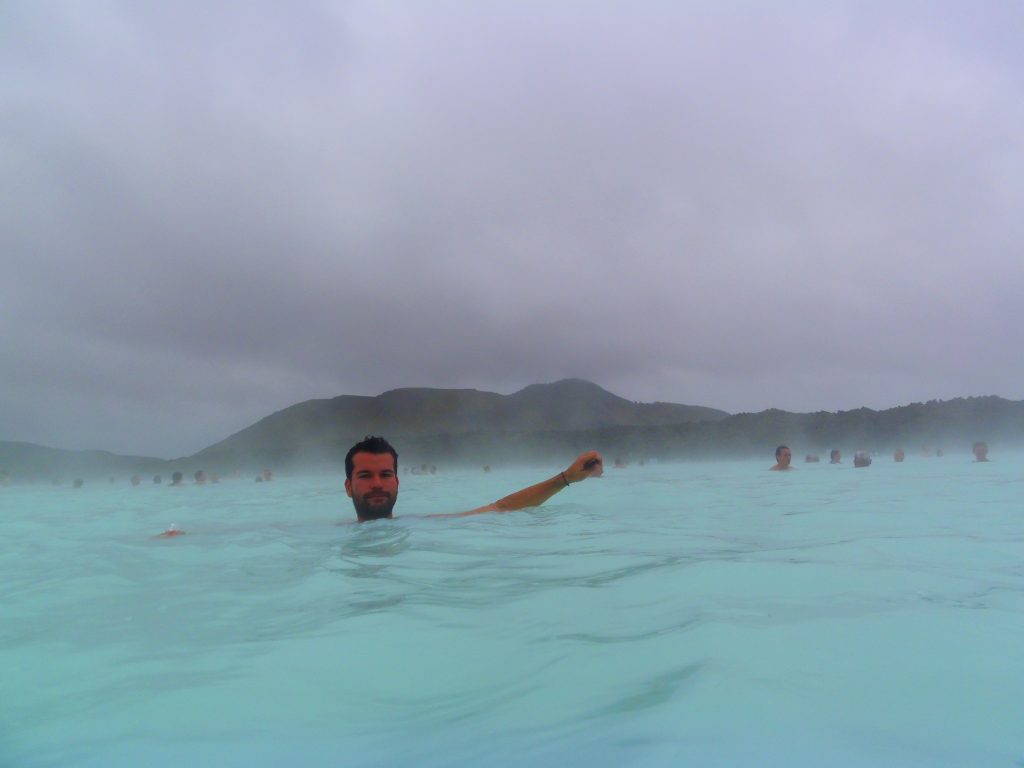 It’s incredible to feel the (almost) boiling water while your father wears coat and it’s 6ºC.

As I told you in the previous article where we started discovering Reykjavik, the Icelandic capital is a touching city because of its culture and rhythm inside. It has a population of 120.000 inhabitants approx., although its metropolitan area reaches 212.000, that is, the huge part of the Icelanders (331.000) live here. It is the northernmost capital in the world. It is a city that I really wanted to visit for long time ago, as I had read very good reviews. Scattered city, of small wooden houses, colorful roofs, it hardly has big buildings, located in a peninsula with smart views, and above all, emblem of the Icelandic culture. Here, the center of the country, is where all the musical activity takes place (I remembered names like Björk, Emiliana Torrini or Sigur Rós), pubs and restaurants (the city is known for its nightlife), urban culture of graffittis, and in short, a feeling of freedom and modernity that works as a model for the whole world.

Leaving our hostel we saw (on our car) the Hofdi house, famous for being the place chosen by Mijaíl Gorbachov and Ronald Reagan to meet in 1986 and make the end of the Cold War. We were heading to Solfarid, one of the very loved monuments of Reykjavik. This sculpture, by Jon Gunnar Arnason, represents a “traveller” solar boat, and it is not a Viking one as it may seem. It is located in a beautiful promenade along the bay of Reykjavik. 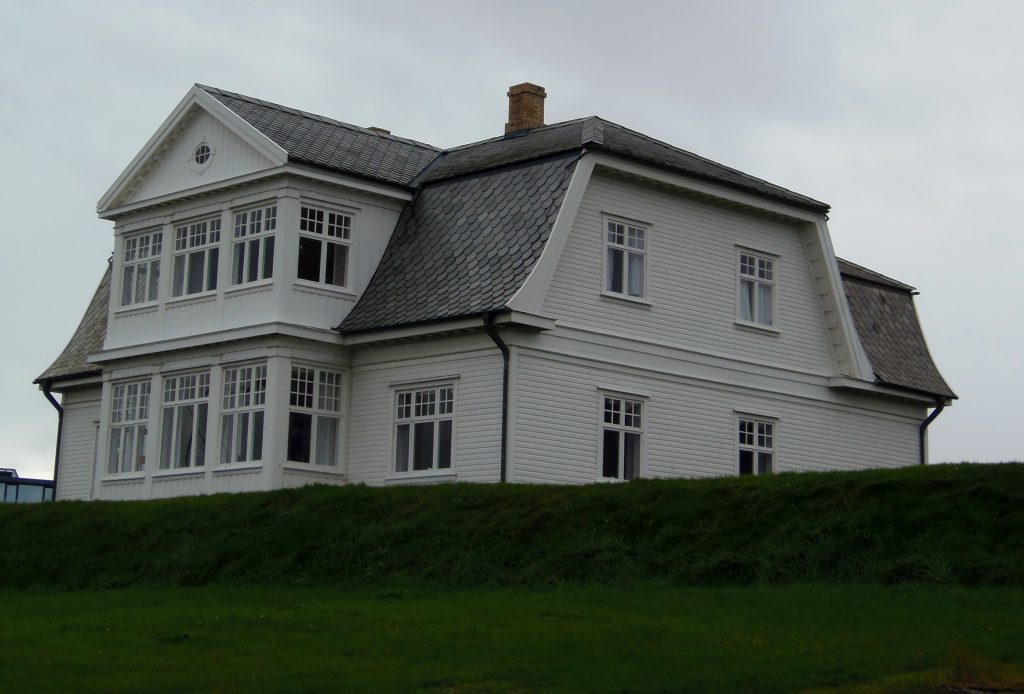 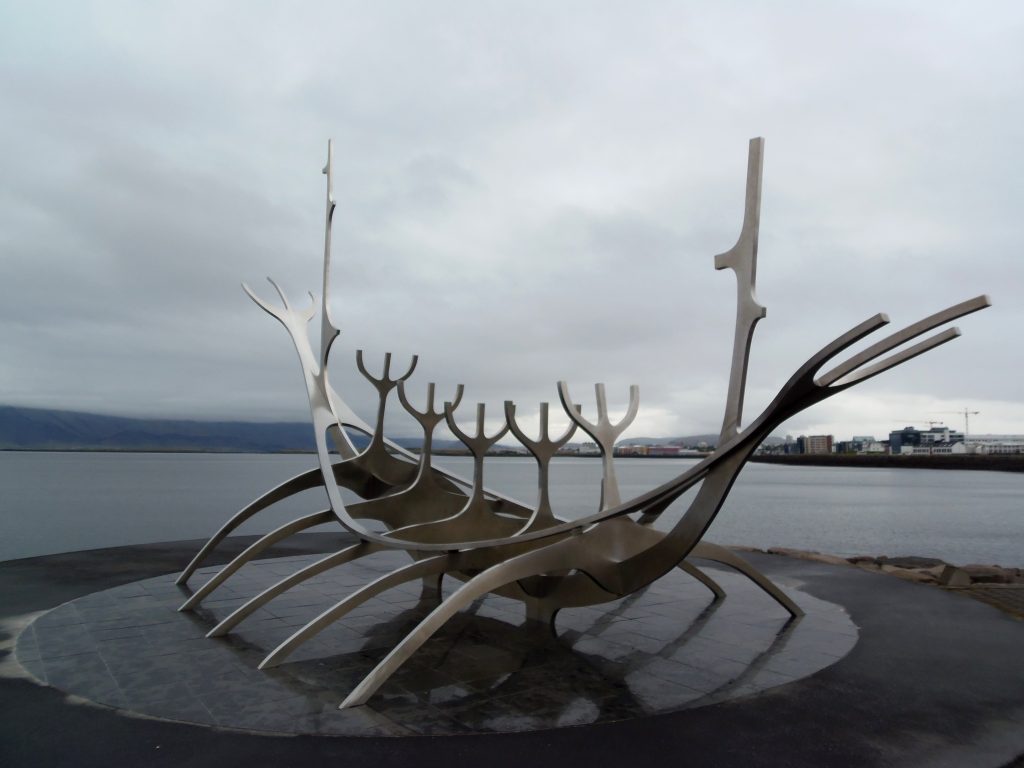 Solfarid in the Bay of Reykjavik.

We saw Harpa again, this time with daylight, and then we visited the Catholic church of the city, Landakotskirkja. It was built in neogothic style in 1929. After this tour in car, we leave it in a parking area near Laugavegur, the shopping and main street of Reykjavik. This street is full of pubs, restaurants, book shops and gift shops. In addition, you can find lots of graffittis that show the urban culture and the freedom of the Icelandic society. 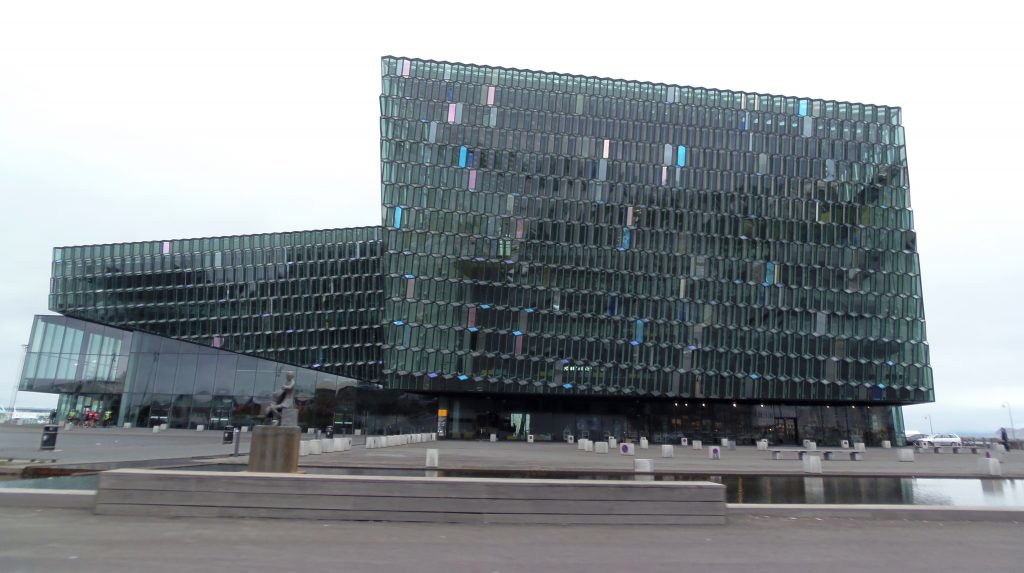 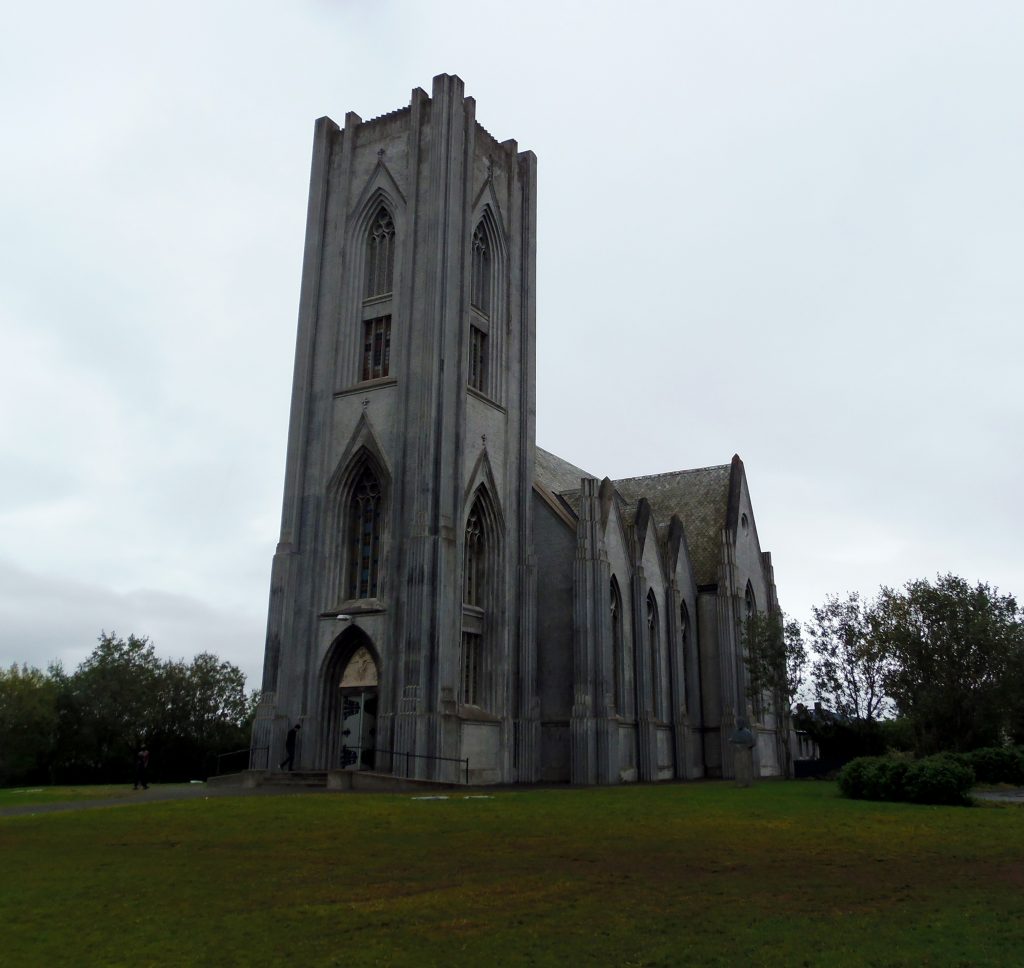 I wore my Icelandic jumper for the first time (bought it in Akureyri) in front of a graffitti in Reykjavik.

Walking through shopping streets we reached Lake Tjörning, in the oldest part of the town. In this side is where the first Norwegian settlers arrived at the end of the IX century. It is nowadays a place to have a picnic and go for a walk, many Icelandic families go there to spend the day watching the ducks, seagulls and swans. A bit further you can spot the Frikirkjan or the Free Church of Reykjavik, built in 1903. Near of here, a bit on the north and getting into the inner center of town, it is the Austurvöllur park, and in front of it, the building of the Icelandic Parliament, the althing or alÞingi. Built in 1881, it is the place of the Assambly that used to take place in Thingvellir, as you can read in the previous article. Just next to it, you can find the Domkirkjan, the official cathedral of the city. It is one of the oldest buildings in Reykjavik, finished in 1787, whose religion is Evangelical Lutheran, and the headquarters of the bishop of Iceland. 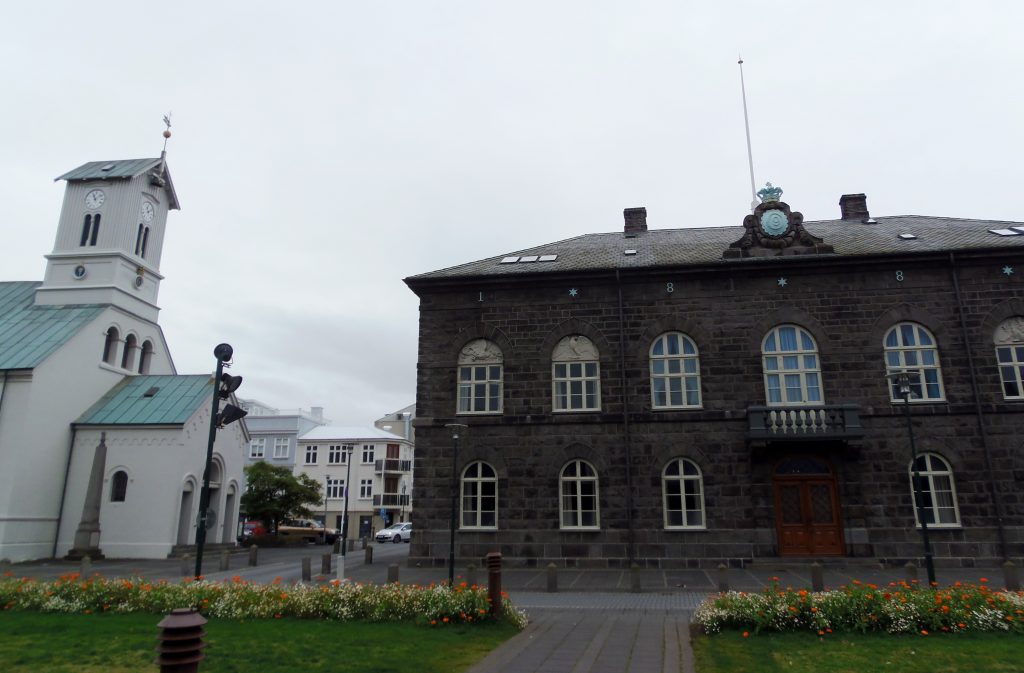 Althing or alÞingi, the Icelandic Parliament, and on its side, the Domkirkjan, the cathedral of Reykjavik.

After his, we went up by a coorful street until one of the Reykjavik’s icons: the Lutheran church of Hallgrimkskirkja, which we had already seen the night before. It is seen from all the angles of the city, as it is one of the tallest buildings and it stands out of the small houses. It was beautiful to go through this street, walking among these wooden houses of lots of colours and the church in the horizon, rising in the sky in a sumptuous way. Hallgrimskirkja was built between 1945 and 1986, and it’s named after Hallgrimur Petursson, a famous poet. The building itself is inspired in the balsalt columns and it reminds its volcanic identity. In front of it, there is a statue of Leifur Erikkson, who was the first discoverer of America, around the year 1000 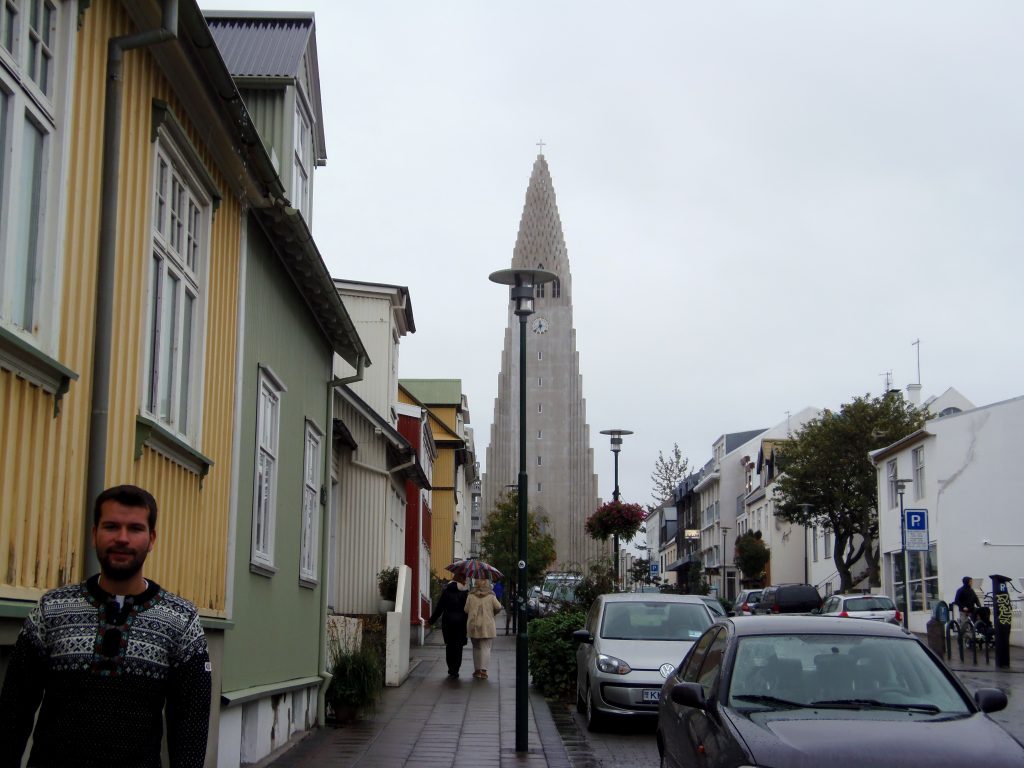 It was raining and it was even more special. 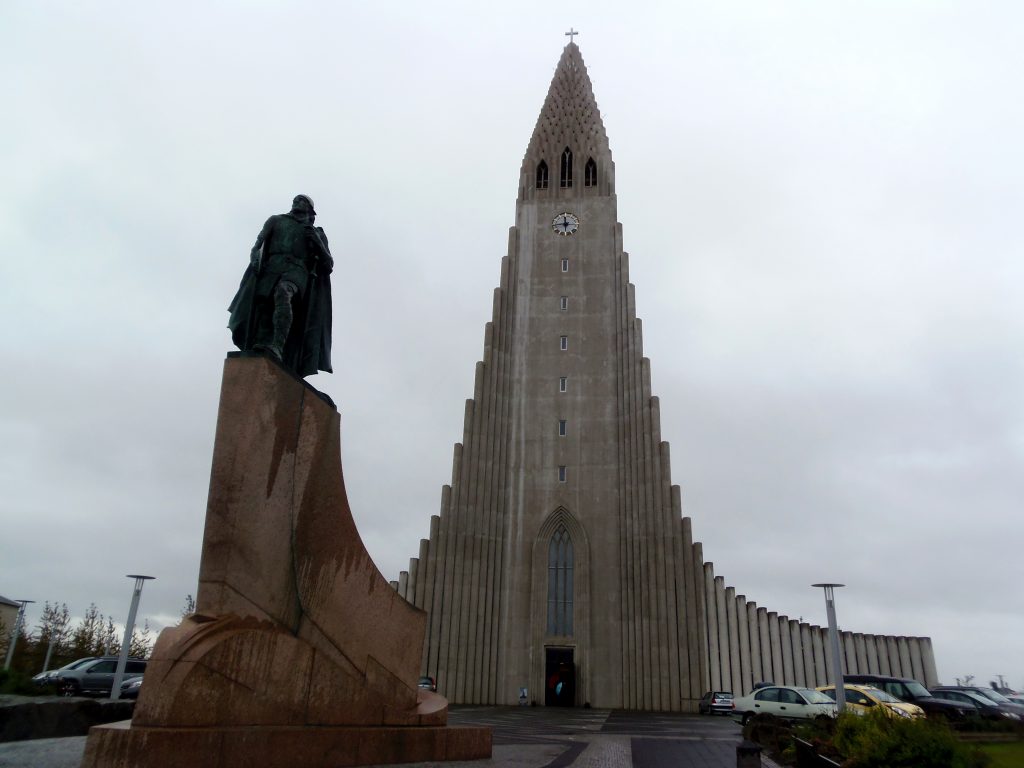 As I approached, I found out that those cement pillars put there, with an unconvincing finishing touch were not so bright to myself. You can enter and climb to the top, something that I strongly recommend, to see the city from above. It is curious to think that all that little town was the capital town, everything was little houses with colorful roofs. In the distance you can see the harbour and slightly on the right, Harpa. The suburb on the right is where Laugavegur is. We waited until the ceremony had concluded to get inside the church. When it did, the pastor stood up outside the door greeting its parishioners and chatting with them. The interior is remarkably bare, as it is a sign of Lutheranism. I liked it a lot, the austerity awarded a high spiritual value at the same time that it reminded the coldness, the snow and the Icelandic ice. It stood out the height of the roofs, vaults and arches, as well as the organ just above the entrance. 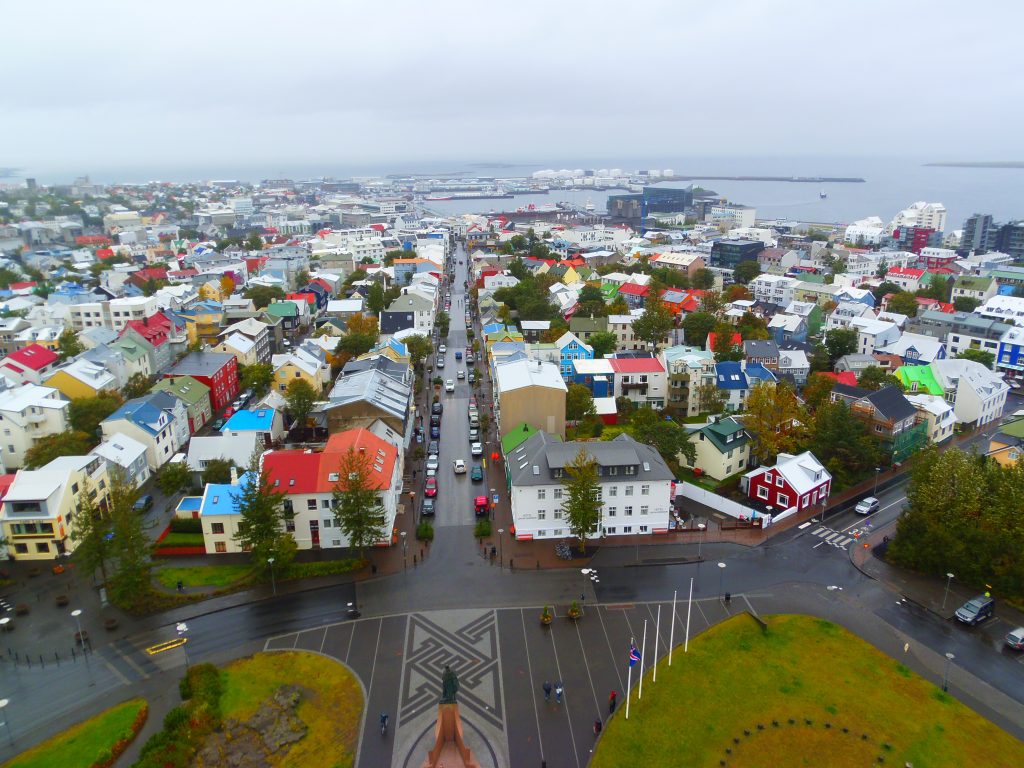 View of Reykjavik from the top of Hallgrimskirkja. 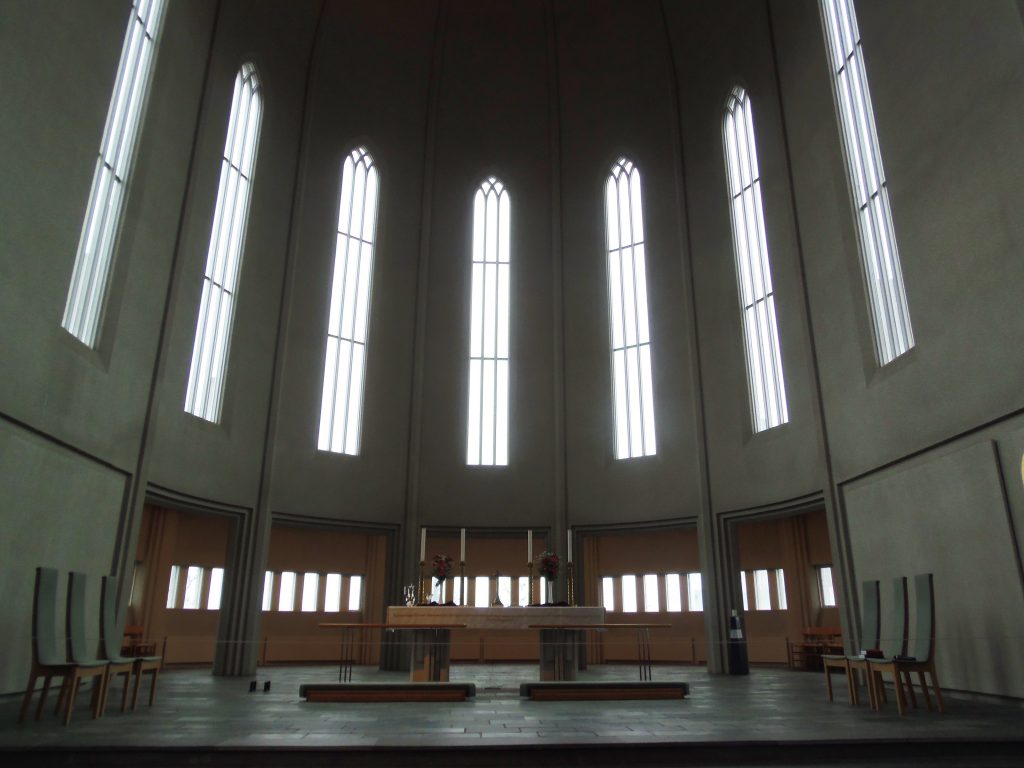 The altar of the church. 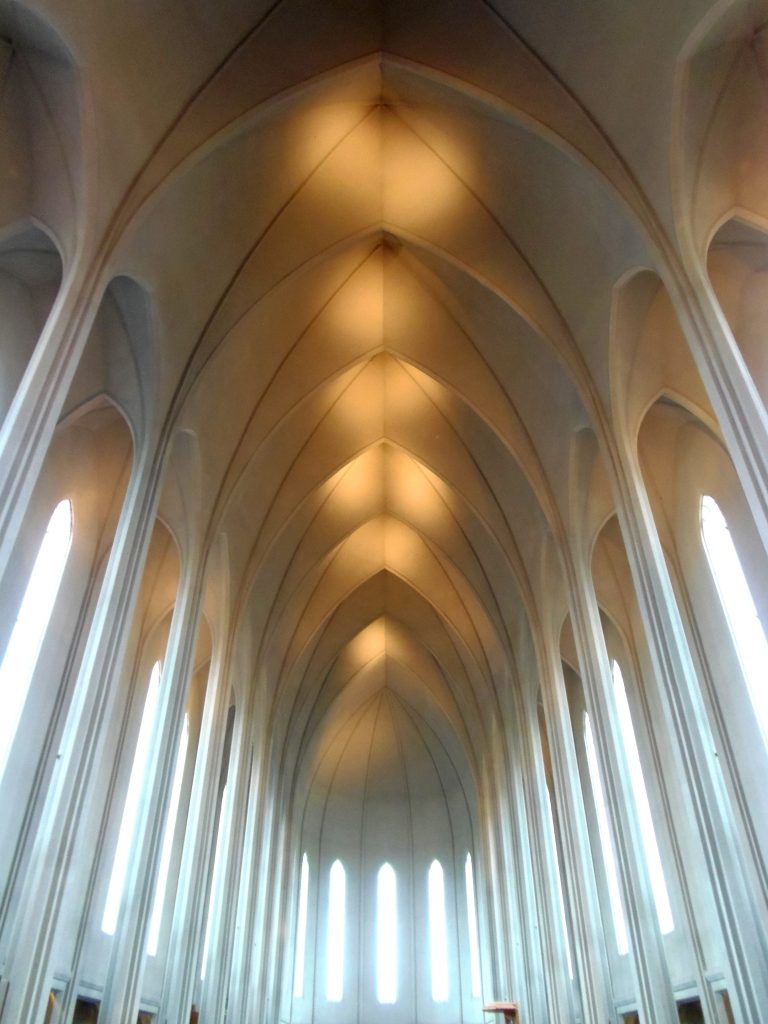 From here, the highest point, we said goodbye to a city that we have loved. Now it was time to relax and visit one of the most well-known places in Iceland, and it didn’t let us down: Bláa Lonid, also known as Blue Lagoon. It is located 50 km out of the capital, very near of Keflavik Airport, that is why we decided to do it on our last day, and then we would leave the car where we had taken it days before.

This blue lagoon has a volcanic origin, and its best feature is its nice and pretty turquoise colour that its water has. From the road, in the surroundings, you may see already small lakes of this colour, all of them inserted in a great rough volcanic ground. It has a big parking area, restaurant, shop, etc. It consists on a spa resort, so the entrance fee is expensive. There are many options including massages, sauna, etc. We chose the basic one: only the entrance to the lagoon on your own. When you pay, they give you a card of access and a bath robe. From the changing rooms you can go to some pools and jacuzzis inside the resort, but it is better to go outside and enjoy a bath in a volcanic lagoon, that heats water geothermically (in fact, there were places where water was cool and other ones where the ground burned). Water is very hot and the floor is indeed volcanic ground and rock: sometimes you can poke your feet! In this lagoon there are some nooks used as jacuzzis, waterfalls and there is also a bar to have a drink. And finally, in the edge of the lagoon there is white “dough” or “mud” to be put on your face, if you want to enjoy a pretty face. All the people had it put, so I did the same! I think it worked out good. 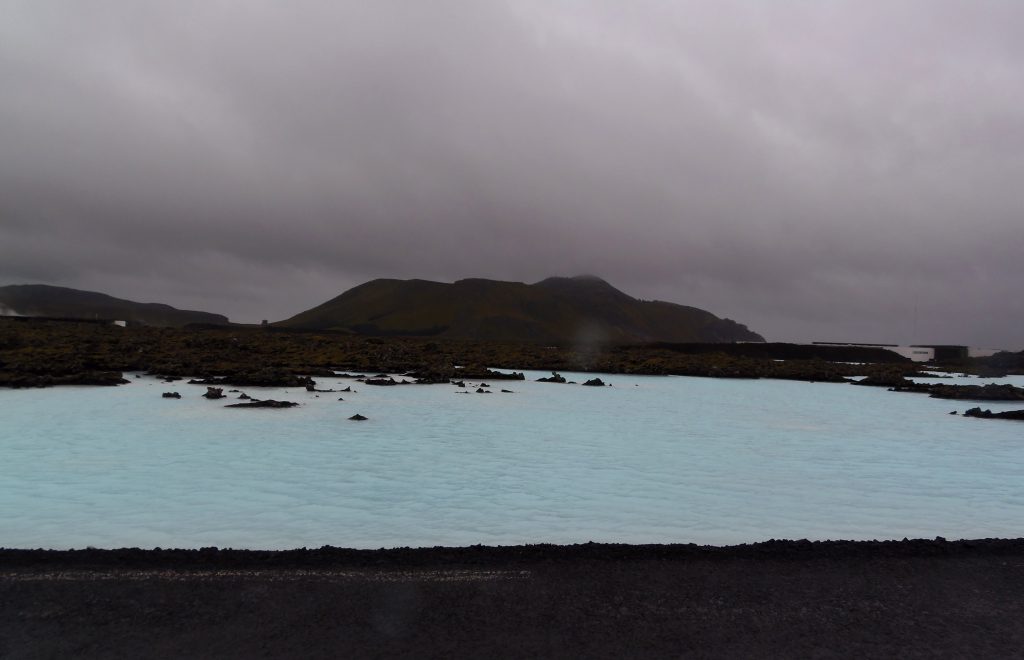 Arriving at Blaa Lonid, from the car we could see this landscape 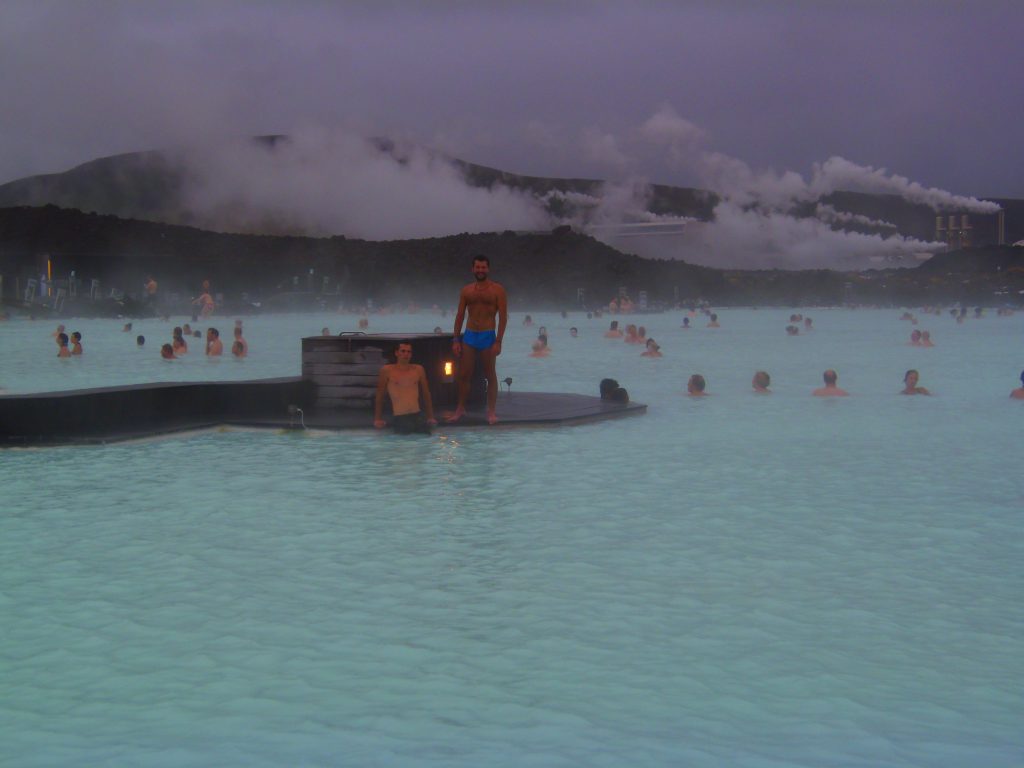 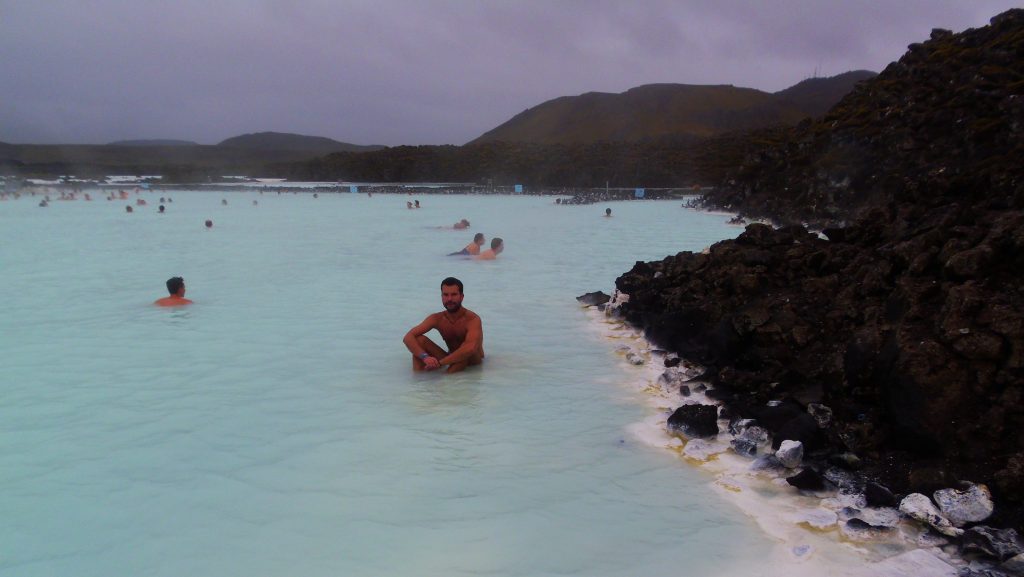 That white thing is used for beauty purposes. You can take it on your own.

It was an amazing experience bathing there while outside it was 6ºC. In addition, the grey and cloudy sky added more power to this experience. I think it is indispensable to come here if you visit Iceland.

We were so relaxed and happy that it was difficult for us to end our trip here. Once the car was left, we waited in the airport until our flight departed to Birmingham. I will tell you more on my next article!